I have no particular attachment to Pat Summitt or Tennessee women’s basketball.  I came of age after Title IX, where women’s sports, if not always culturally or popularly supported, at least had an acknowledged right of existence.  The way I understood it during my childhood, Pat Summitt was like any other great coach in her chosen sport; famous, respected, and of course, the architect of teams you never wanted your favorite team to run into in the tournament.

I didn’t know back then, that she started coaching Tennessee before the NCAA Women’s Tournament even existed, for a salary of $250 a month.  I didn’t know that the women’s Olympic team she played on, in 1976, was the first ever women’s basketball event at the Olympics.  (Seriously, go read her Wikipedia page, it’s like a primer in women’s sports history.) For someone my age, she was just always there, glaring over the court from the sidelines.  The media fanfare over her retirement is remarkable because it’s not suprising, simply her due as a prominent figure in her field.

Best of luck, Pat. And thanks.

I had a Twitter conversation with a few people last night over the use of “Lady” before a team mascot name to denote women’s sports versus men’s sports at the high school and college levels.

One person made the argument that by having the “Lady” qualifier, women’s sports are being separated and there’s an implication that they aren’t on the same level as men’s.

The other person felt that getting upset over the use of “Lady” was taking political correctness too far. They said they’d never even thought about the topic until someone else brought it up and felt that there was no underlying problem with differentiating between the two.

A quick internet search didn’t pull up any history in terms of the first use of “Lady,” but I hypothesized last night that the origin may have come from newspapers needing a way to distinguish between the teams when covering the sports.

It also likely had its origin in the early part of the 20th century, when being called a “Lady” would have been flattering and possibly used as a way to feminize sports and the athletes who played them.

One of the things I most hate about the use of the “Lady” qualifier is when it creates incongruous names. Here in Milwaukee there’s a Catholic high school who’s nickname is the Popes, meaning the girls teams are known as the Lady Popes.

There are a few cases where the “Lady” moniker has gone beyond use in recaps and has become an accepted part of the team’s name. The Tennessee women’s basketball team is known as the Lady Vols.

As someone who’s had to write recaps of four games at one school in one night, I appreciate the ability to have the “Lady” qualifier at my disposal to be able to help differentiate the articles and make sure the reader knew which sport was being discussed

I also admit to being annoyed when I go to my favorite college’s website and read a headline and am not sure which team is being discussed, so in that way I would appreciate the use of “Lady.”

But those are both opinions tempered by my background in journalism. I can see the need to have a way to distinguish between the men’s and women’s sides for clarity and that tends to outweigh my feminist instinct on the matter.

I find myself not particularly bothered by the use of “Lady,” but I feel like I should be more annoyed. Normally any sort of distinction that separates women from men would get my hackles up, so I’m not sure why I’m so unmoved by this issue.

What do you all think? Acceptable usage or inappropriate separation tactic? Does the very mention of a “Lady” team make your blood boil and you start yelling “Oh hell no!” or are you as ambivalent as I am?

The NFL regular season is over. With Alabama winning the BCS National Championship game, college football won’t be back until next fall. For those of you who play fantasy football, a winner has already been decided. (Congrats to THE Blonde Bomber for winning the ladies… fantasy football!) But don’t be too sad. There is still plenty going on in the football world. There’s coaching changes in college football. New coaches in the NFL. And mostly importantly there’s the NFL playoffs!! The Cowboys remembered how to win in January (which didn’t make me very happy). The Patriots got slaughtered by the Ravens (which did make me happy). This weekend is a new set of games that will hopefully be more entertaining than the Wild Card games. (Admit it, aside from the Cards/Packers game, all those games were pretty boring.)

Congrats to Bama for beating the Longhorns 37-21 in the BCS title game.

END_OF_DOCUMENT_TOKEN_TO_BE_REPLACED

His players happen to be classy and amazing kids.

END_OF_DOCUMENT_TOKEN_TO_BE_REPLACED

Screw Christmas; right now is the most wonderful time of the year. You have the NBA, NHL, and Spring Training at full steam. Golf and tennis is picking back up. Those that must have football can occupy themselves with the NFL Draft next month, college football spring practices, and the AFL. And of course the college basketball. Oh, the college basketball. Every night this week there is a championship game from some conference and beginning today with the Big East tournament there’s basketball starting at noon. And then there’s next Thursday. Yes, these are the days that I live for ladies and gentlemen.

So in honor of the greatest two weeks of the year here’s a look at some of the players you’ll be hearing about and watching. Let’s start off right with someone who makes me want to apply to the University of Texas so I can stalk cheer him, D.J. Augustin.

END_OF_DOCUMENT_TOKEN_TO_BE_REPLACED

Any girl who says barfights are anything but a) hilarious or b) hilariously awesome is a) a liar, or b) not someone I want to be friends with. We’re not waving our hands and yelling “STOOOOOOPPIT BOYS” to affect the action; it’s kind of a war cry and mating call. We’re declaring that THAT IS OUR MAN OUT THERE BY GOD LOOK AT HIM GO. This is all by way of saying: Nothing gets me hot and bothered like a football rival getting his ass leveled.

I give you Rico McCoy, via preeminent Tennessee blog Rocky Top Talk. Is it hot in here, or is it just Jeremy Young’s jersey melted to his back?

Welcome to the Pink Locker Room, where the Ladies have tickle fights, eat lots of bacon and talk college football. In the midst of all the NFLy goodness, we still had a fun day of football on Saturday. Let’s check in with our Ladies’ teams…..

Metschick: WOO! RU won Friday night! It wasn’t a terribly pretty win, but I’ll take it. The Scarlet Knights scored 41, and the game was never really close, but seeing so many penalties was a little dismaying. I don’t want to imagine what a better team would do with all those mistakes. And dammit – I have to wait a week to see another game? (RU vs. Norfolk, 9/15/07) . Hottie Mike Teel pictured below:

END_OF_DOCUMENT_TOKEN_TO_BE_REPLACED 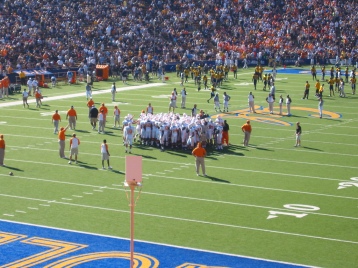 I was thrilled to my orange-painted toes to learn my beloved Vawls were playing Cal for their season opener. Since they had come all the way to the west coast (like they were coming just to see me!), I thought the least I could do was make the trip up to Berkeley to meet them.
END_OF_DOCUMENT_TOKEN_TO_BE_REPLACED

COLLEGE FOOTBALL IS HERE! Welcome to a new weekly feature here at Ladies: thoughts on our homer teams from the previous weekend. We’ve got 8 Ladies and 8 colleges, though that is because G-shum wants two and TSW just putters around the Ladies Batcave muttering about Yinzers and some Lawrence Fishburn-lookalike. Lots of great college football this past weekend, so let’s check in with all the Ladies after their teams’ first fall outings….. END_OF_DOCUMENT_TOKEN_TO_BE_REPLACED

For the first time, a college kid is getting the call up to our big leagues… Erik Ainge, this is your time to shine. This senior QB for the mighty Volunteers of Tennessee has overcome lots of adversity- namely, that he was born and raised in Oregon, and not anywhere in the South. This didn’t hamper his development into a fine example of what a Southern QB should be- just check out how well he fills out those white game pants. As a freshman, he broke Peyton Manning’s freshman TD record at UTenn. But in this offseason, he underwent surgery on his knee- and Vol fans have some concerns what that means for the 2007 season. I know of at least one Vol around these parts who’d be more than happy to help him rehab…

Oh, and yeah, he’s related to Danny Ainge- he is Erik’s uncle. More Erik loveliness after the jump…