Francona at his last news conference with the Sox: classy to the end.

Like any true Yankee fan, I quietly snickered when the Red Sox essentially pissed away the month of September, playing crummy ball and falling out of playoff contention. It’s nice to have a little ammo for the next time someone makes a snide comment about the Yankees “buying championships”. Yes, because Carl Crawford came so cheap.

Then I read this feature today by Bob Hohler and…honestly, Sox fans, I don’t know why you haven’t taken the pitchforks and torches down Yawkey Way. Lackey, Beckett, Ortiz…I could go down the list of selfish bums but why bother. It will only make you angrier. And far be it for me to comment on selfish ball players (*cough*Rafael Soriano*cough*)

Selfish athletes can be found throughout the league, and baseball history is full of douchebag moves by douchebag owners and managers. This situation is, for the most part, no different. But…this crap about Terry Francona popping pills? REPREHENSIBLE. The man brought your organization two World Championships, slayed a supposed 86-year-old demon, dealt with effing Manny and this is how you thank him for his time in Boston? Dragging Francona’s personal issues out in public when the real problem is that you have $15 million pitchers who don’t have the decency and maturity to put down that bucket of KFC in the locker room and go support their teammates and stand by their manager when he obviously needed them most? Real classy, Henry, Werner and Co. Here’s a tip: when a staff member is dealing with personal issues – say, a crumbling marriage – try support and empathy you a-holes.

Here’s how awful this is to Sox fans: one good friend of mine is shunning the team he has supported his entire life on account of this.

And now that Theo heading to Chicago, this is likely Ben Cherington’s mess to clean up. Thankfully, he has a bright spot in Dustin Pedroia, who still cares…until he has an opportunity to leave town. Could you blame him?

Red Sox fans, you have given me hell over the years, but you don’t deserve this. Watching a team choke in September is bad enough, but that’s baseball. Watching the smearing of a beloved manager’s name is simply disgusting. And for that, I feel terrible for you guys.

ESPN, for women. We’d be remiss as Ladies… if we didn’t weigh in on this ridiculous idea that’s apparently a real thing, and not an Onion article.

Miss Minda: Apparently we aren’t smart enough to understand the real ESPN, because it belongs to our dads, our boyfriends, and that cute guy at work we’re always trying to impress.

Games Mistress: What’s kind of worrying me is END_OF_DOCUMENT_TOKEN_TO_BE_REPLACED

Okay, look. I’ve devoted a lot of time and energy into hating the ever-loving hell out of Brett Favre for the monumental screw-job he handed Green Bay fans by first doing the ‘I MAY RETIRE OR I MAY NOT WOULDN’T YOU LIKE TO KNOW’ dance and then the ‘LOLOLOLOL I AM SIGNING WITH YOUR RIVAL’ swan song. I really, really thought there couldn’t possibly be a bigger dick in organized sports than Brett Favre. I mean, the man singlehandedly held up football in Green Bay for a solid three years, and I’m pretty sure Aaron Rodgers still has Favre voodoo dolls in every room of his house.

That said? I’ve never seen an athlete so tone-deaf as to think that a nationally televised hour-long special to announce his free-agency decision smacked of anything beyond rampant egotism. That was horrifying in and of itself.

But a nationally televised hour-long special to break up with his hometown team in the most public manner possible? That’s an unprecedented level of douchebag. 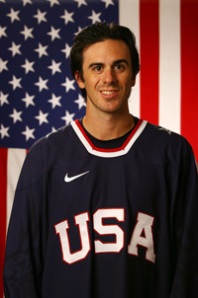 Apologies to our own Lady Bee in advance, but we’re not just talkin’ country pride here. We’re talkin’ hometown pride. That’s right – the Buffalo Sabres’ own RYAN MILLER is a force to be reckoned with, and that means you, Canada! 45 shots on goal is impressive and all, but Ry’s stopping 42 of them and helping Team USA on to a 5-3 win over Canada this past Sunday is even more impressive in my book. More after the jump on the, well, crap that my hometown hero had to go through leading up to that kick ass night.

END_OF_DOCUMENT_TOKEN_TO_BE_REPLACED

What the hell, Bud Adams?

END_OF_DOCUMENT_TOKEN_TO_BE_REPLACED

Still, what Major League Baseball needs is a great World Series, a Series for the ages. And with all due respect to those two other potential matchups, it’s a Yankees-Dodgers World Series that could take the game back to its roots at a time when baseball desperately needs to recover a portion of the trust, if not the innocence, that it has lost in the steroid era.

Look, we’re not naive. We know someone on every team, if not most uber-successful players, at least dabbled in PEDs. Ramirez was dumb enough to get caught, and Rodriguez was dumb enough to think that because MLB promised to destroy the 2004 test results they actually meant it. Ramirez served his time, and Rodriguez got to eat crow in front of the whole nation. It’s over.

But baseball needs to be saved from itself and the whole steroids mess with…a World Series featuring players who featured in two of the biggest steroid-related stories of the last twelve months? That makes the kind of sense that’s not.

You know what would save baseball from itself and the whole steroids debacle? A steroids testing and punishment program with teeth. A great series between teams who have figured out how to play small ball and long ball. Hell, just give me some good baseball.

But this? Laughable example of head-up-your-ass New York homerism at best, whitewashing the serious offenses of the steroid era at best.