Well, it’s finally here: Playoff Time!  This is when you separate the men from the boys.  Well us Ladies are separating the hotties from the not-so hotties.  Take a trip with me after the jump to see some hotties playing in the Wild Card match-ups this weekend.

First up, we have a rematch of last week’s Sunday night game, and, ironically, the last regular season game of the 2009 season.  This time the NY Jets travel to Cincinnati for a date with the Bengals.  Some say the Bengals really didn’t come to play last weekend because they had nothing to gain from winning.  Looks like we’ll find out who really is the better team on Saturday.  It’s been a tough year for the Bengals, first their D-Coordinator’s wife died and then teammate Chris Henry was killed in an auto accident.  The season has also been rough for the Jets, but in a completely different way.  Rookie head coach Rex Ryan and rookie QB Mark Sanchez were dragged through the NY media, and, so far, they have survived.

NY Jets QB Mark Sanchez – yeah we’ve seen him on here before, but I couldn’t resist.

Cincinnati Bengals RB Brian Leonard – I had totally forgotten about Leonard until I started going through the Bengals’ roster.  Say hello to Mr. Leonard.

Another rematch from last weekend.  The Eagles got shut out in Big D this past Sunday.  The Cowboys posted back-to-back shut-outs for this first time in God knows how long. (Sorry I’m too lazy to look it up, but it’s been awhile)  The Cowboys usual December woes seemed to fall by the wayside this year.  Tony Romo and the Boys look to keep their good fortune rolling this weekend.  Donovan McNabb and the Eagles look to bounce back from the crushing defeat at the hands of the Cowboys last weekend.  The offense really needs to step up against the Cowboys’ defense, who has gotten hot at the right time.

And your late-game hotties are…

Philadelphia Eagles TE Brent Celek – I’ve been waiting for a good time to drop a photo of Brent Celek on here, and now is finally the time.  If you like the following photo, I highly suggest heading over to flickr to see more of where it came from.

Dallas Cowboys QB Tony Romo – Seriously, I’m going there again. I cannot get enough of Tony Romo, and, while he may have poor taste in women, he’s freakin’ hot!  I adore his dimples. 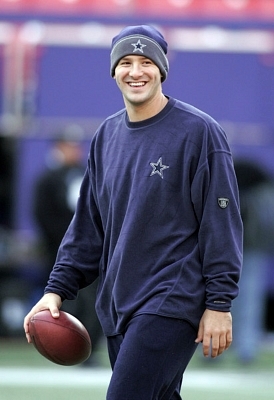 This is another rematch of an earlier game this season that saw the Ravens’ Mark Clayton dropping a go-ahead TD pass and then a crucial first down catch all in the final minutes of the game.  The Ravens snagged one of the final playoff spots after their win against the Raiders last weekend.  This team has been playing pretty inconsistent ball, so who knows which team will show up in Foxborough.  The Patriots enter this game without one of Tom Brady’s favorite targets – WR Wes Welker.  Welker tore his ACL and MCL in last week’s loss to the Houston Texans.  The Patriots have been sneaky good this season.  With the Colts and Saints going for undefeated seasons, the Pats quietly chugged along minus the media blitz.

Some hotties for your Sunday afternoon viewing pleasure…

Baltimore Ravens QB Joe Flacco – Don’t be fooled by the deceivingly close eyebrows, Joe is adorable.  His every day boy-next-door good looks (and personality) are what make me love my QB.  Don’t you judge me! 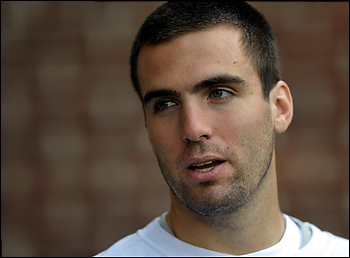 New England Patriots K Stephen Gostkowski – I wanted so bad to put Welker here, but he went and got hurt.  I’m not a big Brady fan, so I went with my favorite position – the kicker!  Stephen’s adorable, so it’s forgivable.

Again, we have another rematch from last weekend.  They should have just called this weekend, “Rematch Weekend”.  The Packers practically owned University of Phoenix Stadium last weekend, beating the Cardinals 33-7.  The Cardinals sat Kurt Warner after the 1st quarter, and the Packers eventually pulled their starters, as well.  So who knows how this game will turn out this weekend.  We really didn’t get much of a preview with the starters sitting on the bench last weekend.

Some hotties to keep you watching all weekend…

Green Bay Packers K Mason Crosby – Sorry, I’ve loved this man forever, so that is one reason why I’m including him in this post.  The other is that he’s hot.  Plain and simple.

Arizona Cardinals WR Larry Fitzgerald – There is just something about this man’s smile that makes me love him.  It’s got to be one of the top 10 best smiles in the NFL.  Oh yeah, and he’s awesome.  What I wouldn’t give to have this man catching balls for the Ravens.