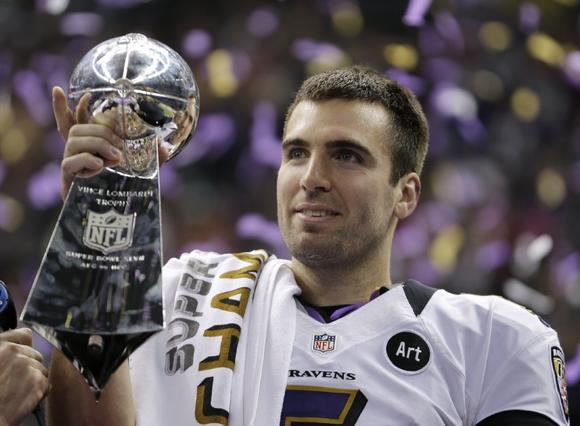 It’s been awhile since one of my favorite teams won it all, and I’ve missed the feeling. I’ve been on a high since the Ravens beat Denver last month thanks to Jacoby Jones’ “Mile High Miracle,” and I’m not about to come down. The momentum from that game carried the Ravens into Foxborough, 9 point underdogs for the second week in a row. The Patriots did not stand a chance.

END_OF_DOCUMENT_TOKEN_TO_BE_REPLACED 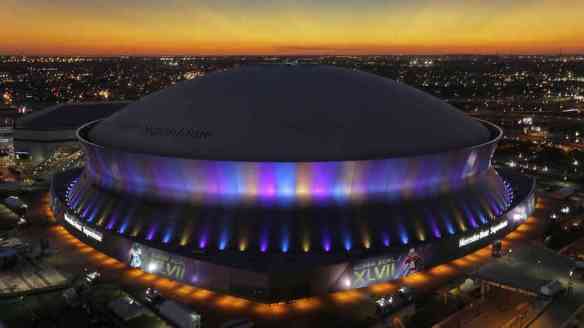 As Games Mistress mentioned yesterday, people love to bet on the Super Bowl. It’s always fun to play in a box pool or bet on the winner or even the coin toss (as I’m typing this, the Papa John’s commercial about winning the coin toss and getting free pizza is on). I already know who I’m rooting for, so a “who’s going to win” bet is out of the cards for me. For years, my friends, family and I made fun bets with nothing actually being wagered, but this year I thought it’d be fun to introduce some prop bets to our party. Here’s a list of fun prop bets for your party, especially if you don’t have any rooting interests.

END_OF_DOCUMENT_TOKEN_TO_BE_REPLACED 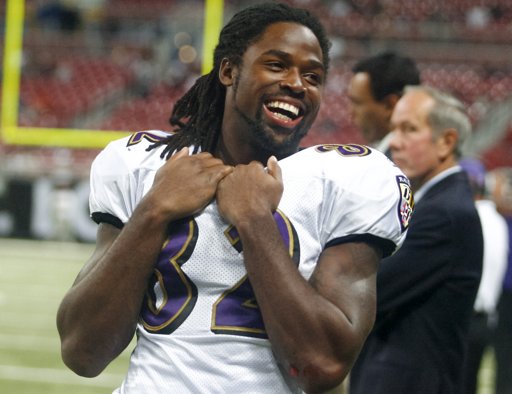 I know what you’re all thinking, “Enough with the Ravens, Raven!” But it’s not every day your favorite NFL team is in the Super Bowl. I feel kinda skeevy selecting Torrey Smith as a Hump Day Hottie, considering I’ve been a fan of his since he was 17. Torrey is a former Terp and you know I love my Terps. Also, I want to share the best smile in the NFL with the rest of the world. Enjoy!

END_OF_DOCUMENT_TOKEN_TO_BE_REPLACED 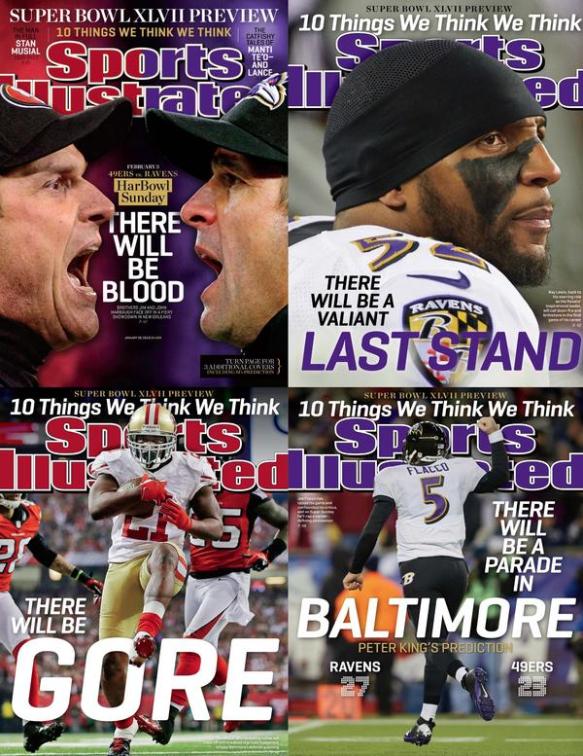 As most of you can tell by my screen name, I’m a huge Ravens fan. I remember the day that Baltimore finally got an NFL team, and I was a devoted fan ever since. In our short existence (est. 1996) we’ve already been blessed with a trip to the Super Bowl that ended in a huge win. But I was a freshman in college who watched the game with one other lonely Ravens fan in a student lounge. I didn’t get to celebrate. I didn’t get to go to a parade, but, hopefully, this time it will be different.

END_OF_DOCUMENT_TOKEN_TO_BE_REPLACED

Not a booty, I know. This just makes me giggle (Photo: J.A. Roberts)

Your Super Bowl contenders are set: it’s the 49ers and Ravens – aka HARBAUGH BOWL, or HAR-BOWL, or BOWL OF BROTHERS (seriously, I just made that one up) – next Sunday in New Orleans. You’re likely aware of the main storylines behind the upcoming game, but here at Ladies… we cover the angle no news organization dares to examine. END_OF_DOCUMENT_TOKEN_TO_BE_REPLACED

An oldie but goodie, I almost forgot this guy was still in the NFL. That is, until I realized he was actually a Baltimore Raven. How did I miss this signing?? Anyways, without further ado, a look at Mr. Sean Considine.

END_OF_DOCUMENT_TOKEN_TO_BE_REPLACED

To get you ready for the NFL Divisional Playoffs this weekend, I thought I would feature a hottie from each team playing this weekend.  To see if your favorite hottie made the cut, take a trip with me after the jump.  I hope I don’t disappoint!

END_OF_DOCUMENT_TOKEN_TO_BE_REPLACED

Well, it’s finally here: Playoff Time!  This is when you separate the men from the boys.  Well us Ladies are separating the hotties from the not-so hotties.  Take a trip with me after the jump to see some hotties playing in the Wild Card match-ups this weekend.

END_OF_DOCUMENT_TOKEN_TO_BE_REPLACED

I'm sorry...what was the question again?

As though the Advent Calendar of Hotness was not enough, here’s a complete buffet of NFL sizzle to wrap up your Friday. The Ladies… were recently presented with a challenge. Karen of Fredericton, New Brunswick writes:

So, in a strange twist of fate, I found myself watching football this weekend. And liking it…Can you recommend a team with the most hotties? ;) I typically have liked the Patriots, but I could potentially be swayed.

We love a challenge almost as much as football booty. Can we successfully encourage this loyal reader to avoid the “victim of regional coverage” trap? (I know a lot of Pats fans in this province. Also, Red Sox fans. It hurts.)

We begin dishing the advice in one of two parts after the jump.

END_OF_DOCUMENT_TOKEN_TO_BE_REPLACED

When it comes to being a sports fan, I have ridden the roller coaster of emotions. I have been privileged to experience the ultimate highs and humbled to have experienced the extreme lows.  Recently, I’ve been forced to take inventory of my sports emotions, so to speak.

As most of you already know, I was born and raised in Baltimore in the early 80s.  My first sports love was the Baltimore Orioles.  When I was a little over 1-year-old, my O’s won the World Series.  That was the last time my beloved franchise was blessed with a title.  Of course, I don’t remember the sweet taste of victory, but I did experience it.  My mom-mom packed up my little self, hopped on a bus and took me downtown for the victory parade.  I have a photo of me in my little stroller, waving my World Series pennant with the parade passing in the background.  What I wouldn’t give to recreate that moment.  Let’s just hope I don’t have to wait until that stroller turns into a wheelchair!

Let’s not forget that until I was a sophomore in college, I had never seen a baseball game that didn’t have Cal Ripken, Jr. playing in it.  I wouldn’t say that the Orioles spoiled me, though.  We were good during my formative sports fan years, but all good things must come to an end.  Personally, I don’t think we’ll ever win until someone finally exacts revenge on that Jeffrey Maier kid. Hate him. While I have come to expect disappointment from the Orioles, I’m having a harder time coming to terms with my other teams.

END_OF_DOCUMENT_TOKEN_TO_BE_REPLACED

So I was going to give this post the “Hump Day Hotties” tag, but I thought I might get some flack over it.  So instead, I’m just going to use this post to introduce you to Joe Flacco, quarterback for the Baltimore Ravens.  Joe has caused a hysteria in Baltimore.  See, we folks from Charm City don’t know what a real quarterback actually is. That is until Mr. Flacco arrived in town.

For years we have tried to find that “Franchise Quarterback,” but he never seemed to develop.  While I was partial to Kyle Boller (solely on looks, btw), others were calling for his head from the moment we drafted him.  Hell, we went a month during our Super Bowl season without scoring an offensive TD! And we won the Super Bowl with Trent Dilfer under center!  Even Disney acknowledges that Trent Dilfer sucks! Can you say “Defense,” much?

So needless to say we’re all pretty stoked that Flacco has taken the reigns of our offense.  I personally don’t think he’s bad to look at, either.  I think his Bert-esque eyebrows are what throw people off, but if he would just tweeze them up a little bit, he’d be a bonafide hottie.  I think he’s adorable, despite the brow problem.  I’m sucker for a guy with dimples!

Check out some adorable pictures of #5 after the jump!

END_OF_DOCUMENT_TOKEN_TO_BE_REPLACED

A preview of things to come?

So we all know who the hot players are, but do you know who the hot coaches are?  With the new trend of hiring younger coaches, the NFL has provided us with a new crop of hotties.  Instead of the coaches reminding you of the old, creepy man who hangs around the neighborhood (Brad Childress, I’m looking at you!), now they’re more like the hot, 30-something dad that moved in down the street! Yippee!

Take a trip with me after the jump where we explore some hot NFL coaches!

END_OF_DOCUMENT_TOKEN_TO_BE_REPLACED

If you haven’t noticed from the last couple of posts, the ladies cannot wait for football season to start. Training camp is in the full swing of things with the first preseason game coming this Sunday. But even still, real football has not started yet so it’s only natural that news is a little slow. The first game of the season is still over a month away. People are mostly grasping for stories to report on. So I have decided to sort out some of the more ridiculous, and entertaining, stories coming out of training camps.  Enjoy! Take solace in knowing football season is almost here.

END_OF_DOCUMENT_TOKEN_TO_BE_REPLACED

Some of us Ladies have been looking forward to football season, so I thought what better way to get everyone hyped than to feature a hottie from every NFL team.  Each week for the next four weeks, we’ll be featuring lesser-known hotties from an AFC and NFC division.

Follow me after the jump to get a peek at the AFC and NFC North.

END_OF_DOCUMENT_TOKEN_TO_BE_REPLACED

In my short tenure here at Ladies …, I have picked an Angels-Cubs World Series, and managed to finish last in our Bowl Pick ‘Em Pool (technically second to last, but that’s only because Cinn forgot to actually pick the games).  So it’s pretty clear I have no business whatsoever picking winners of this Sunday’s NFC and AFC championship games.  Like any good sports blogger, this is not going to stop me.

Since picking based on my sports “knowledge” doesn’t seem to be working, I decided to use a random and arbitrary method, completely unrelated to how much big-game experience the quarterbacks have and whether a star player is not 100% healthy.  However, I wasn’t exactly sure how to come up with said randomness.  And then, while conducting a Google Image hunt for a picture of the Arizona Cardinals’ mascot, I found my muse :