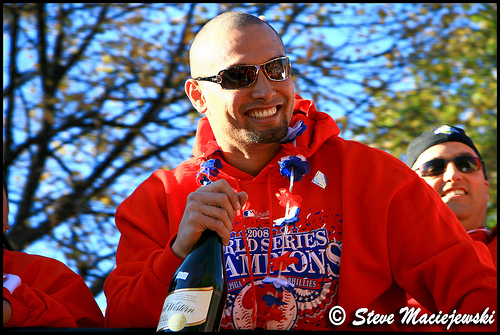 Well, it’s all over, including the shouting. Voting in the Final Vote contest has ended and the results have been tabulated. This year’s All Stars, after days of furious campaigning (more on that later) are Philadelphia center fielder Shane Victorino (and his million kilowatt smile) and Detroit Third Baseman Brandon Inge. (This lady is convinced that Inge is actually thirteen years old and potentially ineligible to work, much less in the Majors, but that is neither here nor there.)

Victorino finished with the greatest amount of votes for any single player in the history of the Final Vote campaign with 15.6 million. (The previous record holder was Evan Longoria with nine million. Once again, the Phillies roll to victory over the Rays. Suck it, Tampa.)

Here in Philadelphia, you couldn’t swing Ryan Howard’s bat without running into a campaign designed to generate votes for Victorino. On Tuesday, announcer Tom McCarthy led a rally in Center City. The Phillies ball girls started wearing Hawaiian shirts during games. Just today, at least two Phillies ball girls were handing out leis and ‘Vote for Victorino’ signs while walking around 18th and Market in grass skirts. Heck, one of our local sports talk stations sent three listeners down to Citizen’s Bank Park, where they were tasked with doing nothing but voting for Victorino for 48 straight hours. My own husband commandeered his interns for the last ten minutes of voting and directed them to do nothing but vote. Heck, I’ve been resisting the urge to tag this post with #votevictorino, I’ve typed that hashtag into Twitter so much. (I’m not alone.)

It worked. Shane will be joining Chase Utley, Ryan Howard and Raul Ibanez in St. Louis, and this particular lady couldn’t be happier about it.

Of course, that doesn’t mean I’m happy with the Phillies. Pedro Martinez? What are they thinking? They do know that he has a tear in his labrum you could march the Phanatic through, right? They do know he’s too banged up for even the Mets, right? They know his last truly effective pitching year was in 2004, and there are even swaths of that season that are questionable?

Sure, the scout reported that he was throwing at 88-91 MPH. That’s great. I want to know how many of those pitches he threw before his arm flew off and he threw out his back. There’s injury prone and then there’s Pedro Martinez, and the last thing the Phillies rotation needs is an aging prima donna who hurts himself getting up in the morning.

Fortunately, Jayson Stark reports that the Phillies have at least partially come to their senses and asked Pedro to throw for them again. Pedro refused, because clearly the world is beating down his door. Cross your fingers that the deal is off, or they’re going to hear me cursing all the way down in the Dominican Republic.