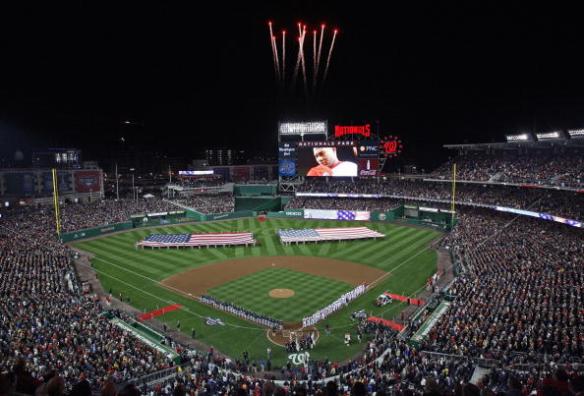 You may have noticed that your Ladies…have a bit of a baseball problem. It’s a sickness. We’re sad, strange people incapable of planning a road trip without checking the baseball schedule in our destination city. This summer alone, the Ladies…will be visiting ballparks all over this great nation (and possibly Canada!) and you get to reap the rewards. Planning a visit to new Yankee Stadium? We’ve got you covered. Wondering what you should eat at Miller Park? We’re on it. Need to know where not to sit at Fenway? We’re there.

This week, we take on baseball in our nation’s capitol. That’s right. A Phillies/Nationals game at brand-spanking new Nationals Park. Or, frankly, Citizen’s Bank Park South.

I call the City of Champion (singular) home, so when my husband and I got the chance to take in a Phils road game from three rows behind the Nationals dugout, we jumped. It’s a new stadium, we’d heard good things, and who doesn’t love a road win over a laughably bad team? We piled into the car, hopped on 95 and headed south of the Mason-Dixon.

Nationals Park is, on the surface, a great place to take in a ball game. The sight lines are fantastic. (Although, let’s admit it, it’s hard to have a lousy view three rows behind the dugout. Even the Vet couldn’t pull that dubious achievement off, although every other seat there was horrible.) It’s an easily accessible stadium mere feet from the Navy Yard’s Metrorail stop. (Take the green line and marvel at the notion of a subway that doesn’t smell like hobo urine.) And hey, let’s face it: The Running of the Presidents? Just awesome. You haven’t lived until you’ve seen a guy in an outsized Abraham Lincoln costume jostle another guy in an outsized George Washington costume in order to win a race around the bases. If that doesn’t make you laugh, please consult your physician because your sense of whimsy is broken.

If food and beverage is your thing (and we don’t blame you if it is) you can’t go wrong with Nationals Park. El Gigante, his cousins and I chowed down on half smokes, all the way, from Ben’s Chili Bowl. What’s a ‘half smoke,all the way’ you ask? Oh, only the most delectable, nitrate-laden concoction known to man or beast. It’s a half hot dog/half sausage link served on a hot dog bun and smothered in chili, onions, cheese sauce and mustard. It sounds disgusting, but tastes like Heaven’s own heart attack. In fact, I’ve been craving one since we got back to America’s Birthplace. They’re good, is what I’m saying, and worth every single second of the potential food poisoning and nearly certain heartburn.

The beer selection is great, as well, once you got past the just opened Beer Garden. (I apologize to fans of the Budweiser family of beers, but I spent Saturday night happily swilling Blue Moon puchased from the vendor just behind our section.) Not a beer fan? Worry not! There’s even a full-service bar. Not content with the dogs and beers, a member of our party ventured out for a scotch on the rocks…and actually found it. (The purist in me wants to cry at the mere concept of scotch at a baseball game. The Irish in me wants to do a jig.)

Like I said, on the surface, it’s a great place to see a game. The problem with the stadium is, unfortunately, the team.

I’ll just come out and say it: The Nationals are awful. I mean, they’re excruciatingly bad. They’re an excruciatingly bad team in a city whose most notable baseball memory is the final game in 1971 when fans invaded, tore apart the stadium and forced the team to forfeit to the Yankees, 9-0. DC is just not a baseball town, and no amount of wistful George Will-penned missives to the National Pastime are going to put rear ends in the seats. Couple that with a visiting team from less than 150 miles north, and you get Citizen’s Bank Park South. As a Phillies fan, I can’t say that I complained when an entire stadium erupted in a ‘RAUUUUUUUUUUUUUUL’ chant when Ibanez walked up to the plate, but for a Nats fan? That has to be demoralizing and frustrating.

The city planners and stadium architects did the team no favors, either. Instead of taking into account that many fans of the team would arrive on the Metro (given the notable lack of parking at the stadium), the architects put a grand, sweeping entrance to the ballpark (complete with some seriously godawful statues) on the opposite side of the stadium from the Metro.

In short? Nationals Park is a hampered stadium, at best. Yes, the food is great and the beer flows and you’ll have a great view of the game, but it all seems half-hearted. The stadium is fantastic. If you’re willing to go to a game for dinner and drinks, it’s ideal. If you want anything a little more in-depth than a great food-and-beers ballpark experience? Look elsewhere. The Nats aren’t ready for you yet.

8 thoughts on “Take Us Out to the Ball Game: The Ladies…do Nationals Park.”