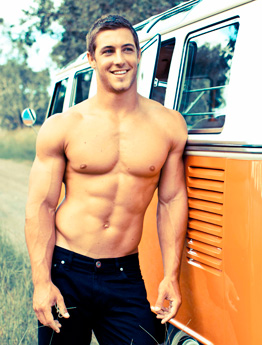 Leave it to me to disappear for a while again, only to resurface when it’s time to dedicate the entire holiday season to ogling men. For today’s delicious treat, a BIG thank you to CuteSports for bringing this one to my attention this summer. I’m pretty sure I single-handedly increased traffic on Google image searches for this gent’s name because of how many times I went on and on to every girl and gay man that hey, maybe Australian Rugby should be aired over here! I will warn you though – it is Friday, and some of these are not for the faint of heart. Oh how I’ve missed posting…

END_OF_DOCUMENT_TOKEN_TO_BE_REPLACED

…Roy Halladay. Do I even need to say anything else? 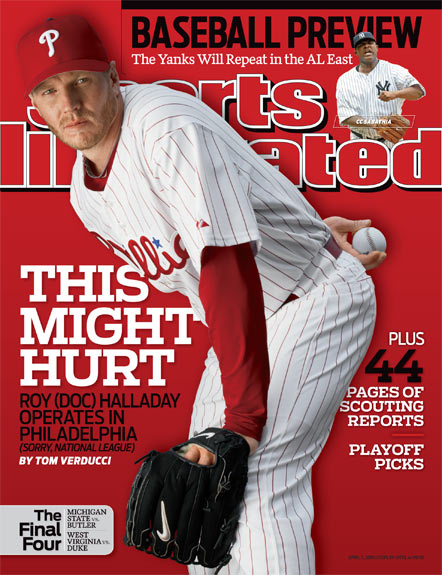 PS NUMBAH TWO: OH AND HE THREW A PERFECT GAME THIS YEAR ALREADY.

We know you’ve been missing the baseball banter. But please bear with us…we’re melllltiiiing!

The following post won’t do a damn thing to cool you down, either. So enjoy this montage of the hotness that is Yankee outfielder Brett Gardner after the jump, and then take a cold shower.

END_OF_DOCUMENT_TOKEN_TO_BE_REPLACED

The World Cup starts on Friday, so it’s time to freshen up your memory of the wonderful, toned, grass-kicking hotties the soccer world has to offer, Starting with Group A.

Here’s a teaser, but follow the jump for much, much more!

The fine, fine men of France (with, by far, the hottest team in this bracket):

END_OF_DOCUMENT_TOKEN_TO_BE_REPLACED

So by now, you may have seen this profile of Saints linebacker Scott Fujita.

If you’re me, you’ve now spent the last twenty minutes drawing hearts around his name while daydreaming about skipping through New Orleans hand-in hand and dispensing bon mots about social justice and equality.

Then again, if you’re a normal person, you thought ‘Huh, cool.’ and went on with your daily life.

Let’s just jot down the reasons why Scott Fujita is my new boyfriend who just doesn’t know it yet, shall we? END_OF_DOCUMENT_TOKEN_TO_BE_REPLACED

Stat-nerds have been falling all over themselves in adoration of Franklin Gutierrez’s astounding CF defense, which is so stunningly awesome that the Mariners are hanging on to him for four more years. But don’t leave the F-Gut lovin’ to the statheads* – he’s someone the Ladies… can appreciate as well. Behold:

He is the WORLD. It says so right on his jersey.

*I, much like Crane, proudly belong to that set of people. Give me FanGraphs or give me death!

END_OF_DOCUMENT_TOKEN_TO_BE_REPLACED

2010 begins with a plea from this sports/man loving lady.  I believe in the power of intention and attraction, so let’s put our thoughts together, and will Jeremy Bloom back into the world of professional sports.

END_OF_DOCUMENT_TOKEN_TO_BE_REPLACED

Games Mistress is thankful both of these men wear Cardinal red.

Happy (American) Thanksgiving from the Ladies!

While we’re thankful for family, friends, and the chance to stuff ourselves with food while in the company of said family and friends, we here at Ladies… are also thankful for what the sports world has given us over the past year.

END_OF_DOCUMENT_TOKEN_TO_BE_REPLACED

Ok, so the Dodgers are currently down 3-1 to the Phillies in the NLCS, and I’m afraid I won’t get to see Andre Ethier again until March.  So this post is basically happening to keep Andre’s hotness fresh in our memories.  Ahh, what a season we’ve had Andre.  Hopefully the boys in blue can pull out the win tonight so we can ogle Andre a wee bit longer. *le sigh*

So if you, like me, will miss seeing the pretty that is Mr. Ethier, take a trip with me after the jump.

END_OF_DOCUMENT_TOKEN_TO_BE_REPLACED

Earlier this week, The Ladies…held their fantasy football league draft. I couldn’t make it, as I was busy shoveling fondue into my face at dinner with my lovely husband. I let the drafting system autodraft my team, and…let’s just say that I don’t suggest doing that. Somehow I have six quarterbacks (if you can call Kyle Orton a quarterback at this point, which I don’t) and one defense. The fact that said defense is Miami is making me consider spending the entirety of the season drinking heavily, because I am so screwed.

Anyway, we here at The Ladies… wouldn’t be The Ladies… if we didn’t bring you a little objectfication along with your football. We decided to pick the hottest members of our own teams, and to bring some lovely photographic evidence to you. You know, because we care. Abs, sweat, and football hotness after the jump.
END_OF_DOCUMENT_TOKEN_TO_BE_REPLACED

No Foodie Friday this week. Sorry. But since you’re here why don’t you think about having chicken tonight? Check out this recipe from one of my fave writers (and the reason I got into blogging) Catherine Newman. [Dalai Mama Dishes]

Given Cutesports’ recent piece on plunking, I thought this was mighty interesting. Heh. [3:10 to Joba]

If I had a nickel for every time I wanted to do Royals General Manager Dayton Moore’s job, I’d have…a shitload of nickels. I’d love to think GMDM totally reads all the Royals blogs out there, and considers our suggestions. That’s proooobably not the case at all, but just in case: Hey GMDM, call up Lenny DiNardo! He could help your bullpen! And he’s a lefty!

We have the Omaha World Herald to thank for this work of art.

END_OF_DOCUMENT_TOKEN_TO_BE_REPLACED

I had a great idea to do a post about the Futures game, checking out more than just the on-field talent. However, there are not a lot of pictures out there of minor league players, it turns out. Google Images and I spent some quality time together and I came up with very little.

Look to Crane to give you some Futures hottie love later…

So instead of giving you relevant content, I’m taking over.

It’s my birthday tomorrow, so follow me after the jump where I indulge myself by posting pictures of soccer boys that make me happy!

END_OF_DOCUMENT_TOKEN_TO_BE_REPLACED

Considering there was quite a bit of baseball, golf and various forms of racing happening this weekend, I was super excited every time I sat in front of the TV and there was international soccer on both ESPN and ESPN2.

The Confederations Cup is going on in South Africa. This is a tournament that happens every four years, the year before the World Cup. It pits the previous WC Champion against the winners of the various FIFA Confederations. Wikidpedia gives us this handy chart:

END_OF_DOCUMENT_TOKEN_TO_BE_REPLACED

As you may know, the Ladies… spent Saturday and Sunday watching and blogging the NFL Draft. Strapping young men in suits about to be come millionaires? Yes, please!

After the jump, a look at some of the best and brightest of the draft. Keep in mind that this list is nowhere near comprehensive, as there were many, many hot men who got new jobs this weekend. These are some of my favorites. Please feel free to share your favorites in the comments.

END_OF_DOCUMENT_TOKEN_TO_BE_REPLACED

So it’s Sunday afternoon, you’ve just watch the first games of the brand new NFL season and your waiting for the Chargers-Bears game to come on. What is a girl to do with that time on their hands? How about watch the other brand of football?

Yes, that’s right. The US Men will be on the pitch tomorrow at Soldier Field in Chicago, trying to represent this great nation to the best of their abilities. Against the number one team in the world Brazil. Yes, Brazil.

While I think it’s pretty, well, stupid for US Soccer to schedule a match the same day as the NFL kick-off, if I was in Chicago I would go. Seriously, there are some major hotties on the Brazilian team, which I discussed earlier in a Copa Cup post. And the US does us proud in the hottie department as well. Take Benny Feilhaber-Midfielder, for example.

More US Soccer hotness after the jump. END_OF_DOCUMENT_TOKEN_TO_BE_REPLACED

Rocking the Plate started out as a little lark of a post, just something we threw up for our own entertainment, and gave way to one of our most memorable comment threads. Summer being the time for reruns, we’ve posted the best of those propositions after the jump, along with responses we received from the blogosphere’s finest.

END_OF_DOCUMENT_TOKEN_TO_BE_REPLACED

So you haven’t been paying attention to the soccer tournament down in Venezuela huh?

But that doesn’t mean you have to go on without finding out the hotties playing. I’ve spent countless hours winding down all the tale running up and down the pitch so we can all truly enjoy “the beautiful game.”

A little info first: not all countries are represented here. Including the stars and stripes. The USMNT will be getting their own post sometime soon. I tried to have at minimum three players per position minus goalkeeper. I wanted to field a team of hotties. Yes, it adds up to more than 11.

To get us started, here is Rafeal Márquez:

I’ve decided to make it my life’s mission to lick peanut butter off his abs.

Brady Quinn was in fine form for the August cover of Men’s Health magazine. For a funny take on this (funnier than my take anyways), go on down to With Leather. But then, come back!

More pictures after the jump.  (FYI: I didn’t shrink the pics – I wanted to leave them in their splendid glory for you guys.) END_OF_DOCUMENT_TOKEN_TO_BE_REPLACED

I may be a homer, but the Mets have some serious HOTT on their team. Join me as we go up and down the lineup of the New York Metropolitans.
END_OF_DOCUMENT_TOKEN_TO_BE_REPLACED