We’ve made our predictions. Now it’s time to get cookin’. And drinkin’. In fact, it is advised to do both at the same time.  The other Ladies… and I have pulled together a Friday Foodie post of epic proportions. If you’re getting a bit bored of chili, we have several suggestions to ensure your Super Bowl Party guests won’t be pulling Manning Faces over the menu. END_OF_DOCUMENT_TOKEN_TO_BE_REPLACED

So, here we are going into the final week of regular season NFL play, smack between Christmas and New Year’s. I thought that perhaps a nice Italian drink and appetizers would suffice. Something different and easy. Fix this trio of Bruschetta with Gorgonzola Cheese and Honey, Capreze Salad Bites, and Prosecco Digestif. Sit back, relax, de-stress and get ready for Sunday … and 2009.

END_OF_DOCUMENT_TOKEN_TO_BE_REPLACED

Now that it’s been cold enough to break out the wool sweaters, it’s time to share with you all my favorite winter desert: Hot Fudge Pudding Cake. This is a really easy recipe and it’s great for those cold, wet game days when you just want to curl up and watch the game in your warm, dry house.

Wouldn't you rather stay indoors and have some chocolate?

END_OF_DOCUMENT_TOKEN_TO_BE_REPLACED 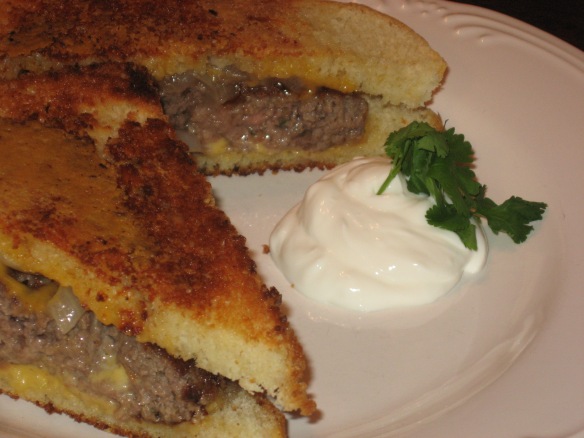 Okay, this should have been up on Friday. But I figured who wants to eat much the day after Thanksgiving? Instead, I’m here to show you today how to make a patty melt and vanilla ice cream shake. Warning – you will need an ice cream maker for this … but you still have time to ask for one for Christmas, right? If you’re like me, and not feeling very well because you’re still recovering from the first winter cold of the season, you’ll get your sweetie to make these dishes. And be patient when you click to view on – the pics take a bit of time to load, but are well worth it.

END_OF_DOCUMENT_TOKEN_TO_BE_REPLACED

We’re welcoming the NFL season by bringing back our weekly food post. This week, I’m going to kick things off by showing you how to make a Cheezy Football and a pitcher of Sparklers.  Let’s start with the Sparklers, so that you can drink while you make your Cheezy Football.

END_OF_DOCUMENT_TOKEN_TO_BE_REPLACED

I don’t know about you guys, but I am really looking forward to vacation this summer. I mean checking and re-checking my airline seat assignments excited! Except for the fact that I’m going somewhere warm, with a waterpark, and I’m going to have to wear a swimsuit. Now, I truly do want to work out; I just wish I had the dedication. Or even just someone with a cattle prod to move me along. But I don’t. I’ve had memberships to gyms I’ve never used. I have an expensive machine in the spare room that is covered with dust. Dusting it might be the most exercise I’ve had in months. I’ve even had times I’ve planned to walk with a friend where I’ve begged off – feigning illness. I’m one of those women, ashamedly, who thinks having kids is workout enough. I need some motivation to get fit. And I think I’ve found it. Follow me to find out how to “get fit by summer,” after the jump.

END_OF_DOCUMENT_TOKEN_TO_BE_REPLACED

I saw this tiny item at the bottom of Paul Hagen’s Baseball Notes today:

Twins reliever Pat Neshek was dominant early last season, but had a 4.83 earned run average in the second half. He thinks the fade might have been caused by an unhealthy lifetsyle, so he’s become a vegan.

I couldn’t believe what I was reading, so I went to Neesh’s blog and sure enough, it’s true! From the March 13 entry:

The last time I ate a whopper jr. was in 2004…the article never gave a date but people might have thought I ate those things last year…not the case. I didn’t go Vegan to do better on the field or improve my game, the article makes it sound like I was looking for answers and this is what I came up with, not the case. I feel like the article was suppose to be about me getting stronger and how I struggled late last season and in some odd way the vegan thing got tied in. … For the most part of the season last year I was vegetarian (didn’t tell anyone) if I had the choice and when we were on the road I really didn’t have a choice and ate what the clubby had or whatever restaurant was close…who cares. This really isn’t new to me its just another step that I’m trying out. I’m not telling anyone to go out and go vegan, I’m not here to say this is the best thing in the world, as is everything I do on here I’m telling my story and shedding light into the life of a ballplayer…

Aside from the defensive tack he takes, this is a really cool news item. How many major league pitchers are vegans? Pat, you have to come to Citizens Bank Park–PETA says we have the best vegetarian ballpark food!

Ladies…
Create a free website or blog at WordPress.com.