Danica Patrick has been around, even in NASCAR driver form, for a while now, and if you are like me you’ve gotten used to rolling your eyes at whatever dumb thing the 13 year old boys who run Go Daddy’s marketing department are making her do now and moving on.  So unless you’re a diehard NASCAR fan, you might have missed that this week Danica became the first female driver to ever capture the Daytona 500 pole.

Unless you are a NFL junkie (and I mean a serious, I-am-dvring-the-scouting-combine-footage-on-NFL-Network junkie), you may have also missed that next weekend Lauren Silberman will become the first woman to attend an NFL regional scouting combine as a prospective draftee.

In the context of the wins-oriented sports world, these are not mind-blowing achievements.  No one has won Daytona from the pole in over a decade, and anyone meeting the NFL’s general eligibility requirements (and ponying up the registration fee) can attend a regional level combine (it’s the Draft Combine, which is invitation only, that gets all the media coverage, usually).

But tell the little girls suddenly swarming Daytona that Danica’s pole doesn’t really matter.  Tell the eleven year old in Philadelphia who still is being forbidden to play football solely because of her gender that the best football league in the world accepting a woman’s application to enter their scouting process as if she was any other player is no big deal.  Just think for one minute about SportsCenter Sunday night ending with the traditional celebratory winner and what that looks like if it’s Danica amid the confetti. Think about watching Fox’s Game of the Week on Sunday, and hearing Joe Buck casually announce “Silberman out to attempt the field goal.”  We may be a long way from that actually happening (particularly the latter), but the path to both of those endings just got a little bit smoother.  And that’s something to celebrate.

Curling cuteness from my favourite Olympics

My seven-year-old daughter played in her very first out-of-town tournament this past weekend. It was a big moment for me: a small part of me felt like I finally “arrived” as one of the millions of North American parents who every year pile their kids and their big stinky bags of hockey gear into a minivan and hit the highway to cheer them on in a chilly rink and remind them not to press all the buttons in the hotel elevator.

Except that I drive a Civic, her gear fits into a small backpack, and she’s a curler.

END_OF_DOCUMENT_TOKEN_TO_BE_REPLACED

It takes an amazing person to get loud and stand up against something that is not only wrong, but personally upsetting to them.There’s a lot of douchebaggery in the world and most of us just roll our eyes and look the other way. We’re often quick to dismiss people as stupid or uninformed and think that there’s nothing we can do about it. That sort of ambivalence adds to the status quo.

Today, our very own Maggiesox got very loud and very adamant when a Philadelphia sports blog posted a screen grab of a woman’s underwear that she accidentally showed while crossing her legs during a panning shot of the Phillies game Tuesday night.

She rightfully pointed out that this was akin to taking a picture up a woman’s skirt without her knowledge. But Kyle Scott of Crossing Broad (don’t go there, the pic is down and they don’t deserve the page views) took it one step further by posting said picture on the internet.

Maggiesox, and many of her wonderful Twitter followers, spoke up loudly on Twitter today, pointing out this is invasive and creepy and rapey and had Scott taken the picture himself and not as a screencap, could have been punishable by jail time. She went to local radio and television stations and asked them to stop talking about the story and to stop sponsoring and endorsing CB. She also emailed MLB, pointing out that CB was breaking MLB’s copyright laws.

The story even reached to Jezebel, who covered the gist of the background, linked to Maggiesox’s twitter and bought the story to a much larger audience.

And when folks started backlashing at her and trying to justify the whole thing, she stood her ground and took the incredibly brave step of sharing her own story of a man taking an upskirt photo of her and how it has affected her life. That man received three months of jail time.

Both Scott and many of his readers/Twitter followers defended the posting of the picture, including pointing out that other sites, including Deadspin, have similar pictures posted online. As though the fact that other people are doing despicable things somehow justifies Scott doing so.

They also made plentiful personal attacks at Maggiesox, going as far as accusing her of being jealous that it was this unidentified woman and not Maggie’s ladybits being splashed about the internet.

Even if we give Scott the benefit of the doubt and assume he didn’t think far enough to realize that posting the picture was wrong and invasive, as soon as multiple people pointed out to him what was wrong with it, he should have taken it down. Instead, he continued to defend the act.

Just writing about this tonight has made me ragey and stabby like I was this afternoon, and there’s probably not much more to say.

Instead of focusing on the problem, let’s focus on the woman that worked towards being the solution: A big, mighty  YOU GO, GIRL! to Maggiesox for not being afraid to stand up and yell about how wrong this whole thing was.

If you guessed 87 as the number of minutes the Pens spent in the sin bin Sunday, you'd be terribly close. (Photo: Getty Images)

You can blame the Leafs’ freefall from playoff contention on this, but I’ve been suffering from hockey fatigue. And so, you’ve been without an NHL Playoff Preview, and for that I apologize.

It seems I haven’t missed too much actual hockey, if the Pittsburgh-Philly series is any indication. The Flyers took a commanding 3-0 lead in the quarterfinal series with an 8-4 win Sunday over the Pens, a game highlighted with more Pier 6 brawls in a single afternoon than I’ve witnessed in recent memory. Someone want to remind Crosby that he should be using his stick to score goals, not whack Bryzgalov’s glove? Ugh. Thankfully, there’s a nice cooling off period for these guys – they don’t meet again until Wednesday.

In 1988, I started my public career as a sports geek by standing up in front of my entire elementary school and correctly volunteering that the summer Olympics would be held in Seoul, South Korea.  For this feat, I won an official US Swim Team swim cap.

Barely old enough to be one of my babysitters, Janet Evans went to Seoul and won three gold medals.

Now I’m all grown up (I’m actually older than my parents were in ’88) and looking forward to a summer of geeking out about the London Olympics all over the Internet.  Janet Evans hasn’t changed much either: at 40, she’s qualified for this summer’s US Olympic Trials after an unprecedented 14 year hiatus from swimming.

END_OF_DOCUMENT_TOKEN_TO_BE_REPLACED

Hope everyone out there had a very Merry Christmas yesterday! (and Happy Hanukkah for two more nights!)  As I’m sure you noticed, the NFL treated Saturday – Christmas Eve – as if it were a regular Sunday filled with regular season football games, and we were treated to an extra Christmas present of Aaron Rogers and his Packers getting back on track with a Bears beatdown last night. (I believe my favorite Facebook comment from a friend last night was “I can’t believe McCarthy is making the Packers practice on Christmas.”) However, something was brought to my attention this morning that made the Packers-Bears game just a little better, and that is sweet vindication from this lady Green Bay fan: 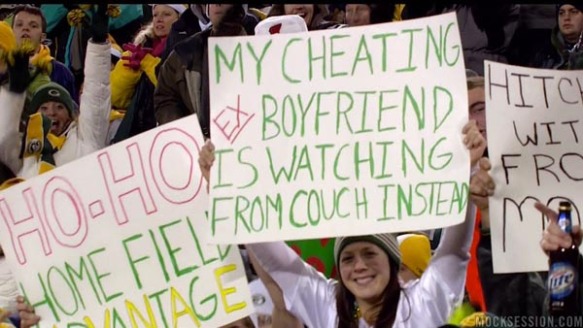 Bet he wishes he didn’t cheat now! You go, girl!

I’m a giant bundle of nerves for the Brewers’ Game 5 tonight, so excuse the hit and run style of this post.

I wanted to point you all to the story of Brianna Amat, senior from Pinckney Community High School outside of Ann Arbor, Michigan.

On October 1 she was named the school’s Homecoming Queen. Less than an hour later, she kicked the game-winning field goal during the Homecoming football game.

By the way, Amat also has a 4.0 and is treasurer of the Student Council.

She missed an extra point early in the game, leaving her team with a slim 6-0 lead. But her field goal in the third quarter was the difference, as her team went on to win 9-7.

She has nothing but positive things to say about her time on the varsity football team, which warms my heart. She could have encountered derision and difficulty, but they seem to have welcomed her with open arms. And she’s having a ball.