Josh Reddick showed off his beard and belt?

One of the best parts of spring training is team photo day! Lucky for us, many teams had their official photo day yesterday giving us some great shots of our favorite guys. (I suggest thumbing through the Getty Images’ photo gallery.) As I was perusing through the pictures, I came across some real gems, including the insanely crazy picture of Josh Reddick above. I did some Googling and found out there was a story behind the photos.

END_OF_DOCUMENT_TOKEN_TO_BE_REPLACED

Aren’t you impressed that I refrained from using a caps locky title with multiple exclamation points? BUT IT WAS SO TEMPTING!!!!

Monday was the big day for pitchers and catchers from several MLB teams to report. Others, like my Yankees, report Tuesday. And then you have those like my second husband Derek Jeter recovering from surgery and other ailments who have been at their respective training facilities for a while. All this to say HOORAY FOR BASEBALL’S WELCOME RETURN! How about a photo essay?

Let’s start with new Jay R.A. Dickey, who is kind of an awesome human being in case you weren’t aware. It’s going to be tough cheering against this new AL East foe.

There’s something about a maple leaf on R.A. Dickey’s hat that makes him even more endearing. (Canadian Press photo)

END_OF_DOCUMENT_TOKEN_TO_BE_REPLACED

Although it wasn’t quite up to the standards of last year, with the meaningful games being all about playoff seeding instead of mere survival, at least we had the Oakland A’s and their surprising AL West Title win to entertain us. Is this truly the year of Moneyball? Or is it just going to be the Yankees, Cardinals, or Rangers taking the pennant again? We discuss!

END_OF_DOCUMENT_TOKEN_TO_BE_REPLACED

Since the Cardinals played the Opening Night game on ESPN this year, on actual Opening Day I had my pick of games on MLB.tv.  By the time I got home from work, the Indians and Blue Jays were tied in the 9th inning. “Oh, I’ll just watch this quick dramatic conclusion,” I thought.  Then it turned out to be the longest Opening Day game ever played.  It went on so long, in fact, that the benches for both teams saw a lot of work.  Which brought in Omar Vizquel. Who yesterday turned 45.

A longtime Indian now with Toronto, Vizquel got a warm round of applause from the Cleveland fans both when he was first inserted as a defensive replacement, and later when the game went on long enough to give him an at bat.  In an MLB where players my age are now considered on the far side of their prime, and where many of his contemporaries are now mangers, Vizquel’s longevity is both remarkable and jarring.  (Related: Chipper Jones turned 40 the same day. Chipper. Jones. is 40.)

Other sports news properly introduced with “it seems like only yesterday….”

END_OF_DOCUMENT_TOKEN_TO_BE_REPLACED

Braden faced 27 Tampa Bay Rays and put them down in order. It was the second time in less than a year that the Rays had been on the wrong end of a perfect game. 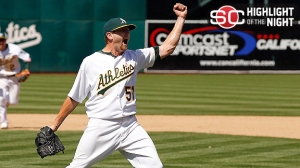 On Saturday, Jody Gerut hit the double to complete his cycle in the ninth inning with two outs. The Brewers’ last cycle came in 2004 from the backup catcher. Seems the Crew gets the power from the unlikeliest of sources.

No, no! He's not going anywhere!

Somewhere, in a vast wilderness where cell phones signals go to die and there is no SportsCenter, Crane is feeling a psychic wave of untold joy and relief. That’s because the trade deadline has passed and Roy Halladay stayed in Toronto. Hey, Riccardi, thanks for playing with the heads of Jays’ fans these last few weeks! There’s a special place in hell for GMs like you – right beside John Ferguson Jr.

It’s been a busy few days. Let’s put all the nonsense of PEDs and Papi behind us and concentrate on the actual game of baseball baseball transactions. If your fave player left on a jet plane today for another team and you don’t know when he’ll be back again (hint: check the team schedule), I’m sorry to hear that. On the other hand, if your team has been injected with newfound playoff hope, congratulations! Hope that works out for you guys! Unless you like the Red Sox, and then…you know how I feel. END_OF_DOCUMENT_TOKEN_TO_BE_REPLACED

I am going to take so much flak for this, and you know what? If I cared, then I wouldn’t be writing this post. Good morning. I think I’m going to go take it out on the street while the rain still falls.

Listed with RAR and FIP are all AL pitchers who 1) didn’t make the All-Star team, 2) have BABIPs over .250, and 3) have a greater RAR than Tim Wakefield.

Ladies…
Create a free website or blog at WordPress.com.