Due to the wonders of Interleague (and my boyfriend’s aunt that lives in Chicago) we were able to knock another stadium off our list the weekend after we were in Minneapolis when we saw the Brewers play the White Sox on Chicago’s South Side.

Can we just go ahead and accept that I’m always going to call this stadium Comiskey? “The Cell” is a stupid nickname and US Cellular Field is too long. Plus, corporate naming is dumb (Et tu, Barclay’s Brooklyn?)

(Additionally, we have a US Cellular Arena here in Milwaukee which is called The Cell, leading to too much lame confusion)

Comiskey is super-accessible via the El, both the red and green lines are within a few blocks. The aunt had planned on us taking the red line, but we entered a station downtown that the red didn’t run through. Luckily, a nice man told me we didn’t have to go to another station, but could just hop on the green line.

There isn’t really much to see from the outside. Built before the new-neonostalgic ballparks, US Cellular is pretty plain outside and there aren’t statues or plazas or anything (at least on the two sides we saw).

Since we were with family, we didn’t get as much of a chance to explore the stadium as we would have liked. Also, there really aren’t walkways, stairs or escalators within the stadium. You actually enter the stadium across the street and are filed into different lines based on your seat location. You really can’t move among the different levels once you are inside and you can’t go to a level that you don’t have a ticket for.

I guess this kept it from being less crowded, but would really stink if you didn’t know that, bought top section tickets and never got a chance to see the rest of the stadium.

Here are some of the various walkways into the stadium

The aunt got the tickets and I must say, our seats didn’t suck

There’s a statue park raised out in left field and the club’s retired numbers are on the outfield wall.

One of the weirdest things was that there were only two “real” decks with a bunch of suites, etc in the middle.

Presumably because it was a 30th anniversary, the White Sox honored their 1972 team prior to the game.

Goose Gossage and Dick Allen each threw out a first pitch

There were some cool scoreboard details in honor of the 1972 throwback – the Brewers were in the AL back then and the two teams were rivals. They compared current and former rosters, used the old logos and had trivia. 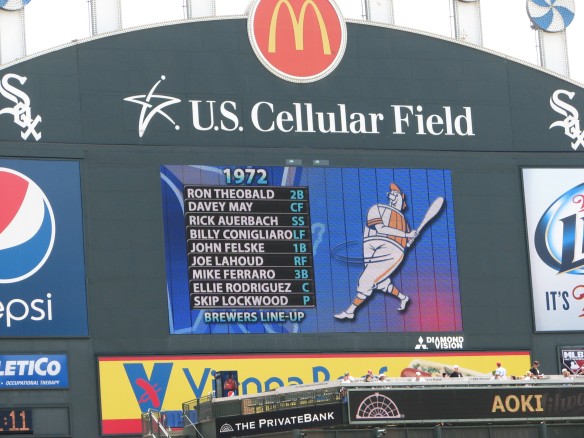 The game temp was 100, we sat in the sun the whole time, I got crazy sunburned and it was a pitcher’s duel that went to extra innings and the Brewers lost (because their bullpen is awful!) 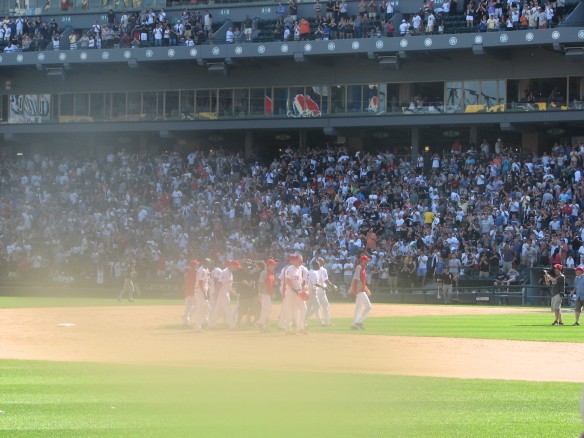 Things I did not like – being unable to see the field from the concourse, the complete and utter lack of TVs on the concourse and the awful sound system meaning you couldn’t hear the radio announcer’s call, either. So basically if you left your seats, you had no way to keep up with the game. On a 100 degree day where we were seeking water and shade fairly often, that pretty much sucked.

Lastly, the view from the much less crowded and just one block further away green el line platform, heading back into the city

Bonus: The aunt’s renting a condo right on the water and I took some pics of the spectacular view her building afforded us 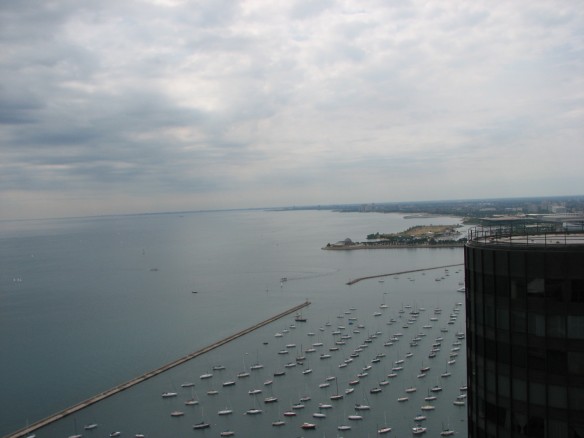 4 thoughts on “I was there: US Cellular Field”