The uproar two weeks ago about whether or not an adult has to give away a baseball that enters the stands to a child had me thinking about collecting memorabilia.

We have a (wo)man room –  man room sounds better, but honestly, most of the stuff in there is mine…

We don’t have anything that we spent a lot of money on – I think we paid for maybe one signature in the bunch – but we do like to display some of the various things we’ve picked up at games. Aside from stadium giveaways, we have a few banners with logos on them, since I’m a major uni-nerd and we’ve framed programs and ticket stubs from some of the cooler games we’ve attended.

So this got me wondering about whether sports fans inherently become collectors of “stuff” or memorabilia merely by being fans who attend many games. Seems like every sports fan I know has at least one thing that they’re proud to own and show off.

So what are the coolest pieces that we Ladies… own?

Follow the jump to find out
For Miss Minda, it’s not about monetary value, but perceived value to her:
“I have a bat signed by Mike Sweeney. I blogged about it here. Other than that, I’m not big into autographs BUT I do keep a box of every ticket stub from everything I’ve ever attended.”

For Buffalita, the piece has family history:
“My story is pretty unique, but unfortunately I was a bit too young to remember it for myself! Way back in 1990, my brother entered himself into a contest at Pizza Hut with the Buffalo Bisons.  Pilot’s Field (as it was known then) was relatively new, so Pizza Hut sponsored a promotion that season where each week, a name was drawn and the winner got great seats behind home plate, a personalized Bisons jersey, and the chance to catch fly balls in front of the whole crowd.

As strange luck would have it, my brother actually won the contest, but being only 13 years old that year, he wasn’t eligible to do it.  Fortunately, they allowed my dad to fill in for him. When the day of the game came, my dad donned his new Patterson Bisons jersey and was carted around with mascot Buster Bison in front of a crowd of likely around 15,000 fans while ‘Jim Patterson – Middleport, NY’ flashed across the scoreboard.

Once that was over, a pitching machine was brought out, and armored with my brother’s old little league glove, it was time to get down to business.  The whole point of the contest was for the chosen name that week to catch three balls from the pitching machine that got progressively more difficult, and depending on how many you could catch, the entire crowd would win free food and drinks from Pizza Hunt.  After the easier practice pitch was caught, the first one was send out – my dad caught it, and everyone instantly won a free drink.  Second one – little harder, but he got it – free breadsticks for all.  Finally the last one is sent out – the hardest of all three, and it looked as if he was about to miss it.  With a last minute maneuver, he caught it!

A happy crowd and pats on the back at concession stands and on the subway home – Patterson had won each person in the whole stadium a free personal pan pizza.

Now that my beloved NY Mets have my old hometown Buffalo Bisons as their farm team, I proudly wear my Patterson jersey and think back to the day that my dad won a whole lot of strangers a whole lot of pizza.” 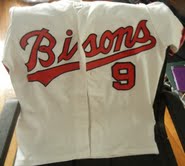 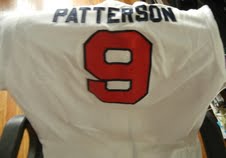 Lady Bee’s story also has more to do with family love than team love:
“This might be cheating a little, because this souvenir actually belongs to my now 11-year-old son and not me. But seeing this every morning, hanging from a hook in the mudroom, reminds me of the first pro sports event I took him to: a CFL game at Molson Stadium in Montreal a few summers back (you may recall a The Ladies… Do post from that time) It was the first CFL game I ever attended as well.

Thanks to a connection, my sister set us up with great seats and a field pass to meet players after the game. I offered to buy Bee Jr. some gear at the game. He chose a foam finger and this ball cap.

The Als beat the Ti-Cats in fine fashion that night, and not long after the crowd dispersed, we were permitted to step on the turf. I helped my boy coax his way through the maze of players on the field (including ageless QB Anthony Calvillo) and they were more than happy to sign his ball cap. Getting our picture taken with now retired slot back Ben Cahoon was pretty sweet, but in truth my favourite memory of that night was watching my kid run happily across the field at Molson, pretending he was making a special delivery to the end zone. I’m not sure the experience made him a bigger football fan, but it left a lasting impression with me.” 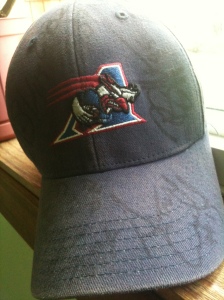 Games Mistress has come up with a crafty way to display some of her favorite mementos:

“Last summer, I participated in a traditional NYC dumpster dive for the first time when I came across a beautiful wooden folding card table sitting out on a neighbor’s trash pile.  Other than the faded stain and the rip in the vinyl top, it was in pretty good condition and my apartment was lacking a real table, so I carried it home, tore the vinyl off, stripped and re-stained the wood frame, and then decoupaged selections from my collection of ticket stubs, theater programs, and other random memorabilia across the top.  It’s primarily theater and dance memorabilia, but then there is this corner (picture 1), which contains my Baseball Hall of Fame ticket, my ticket to see the Cardinals play at (old) Yankee Stadium (the only time they did so in interleague, I believe) and a random scorecard from a Yankees-Royals game. I picked a non-Cardinals scorecard because it would have to be partially covered up – although that game is the only time I’ve ever been asked by late-arriving strangers if I could summarize the scoring, so it’s kind of special for that reason.

However, the prize of my collection isn’t on the table.  It’s (going to be) in a frame (eventually). (Picture 2) This is my ticket from Game 6 of the 2006 NLCS at Shea Stadium — the only postseason baseball game I’ve ever attended.  A good friend of mine who is a Mets fan had purchased a season ticket package that year, and was then able to get postseason tickets — when his girlfriend (now wife) had a grad school commitment that kept her from Game 6 unexpectedly, I got the last minute invite.  At the time the Cardinals were up 3-2 in the series; my friend told the other Mets fans in the group that bringing along a St. Louis fan was good karma.  Not only did the Mets win the game, but my friend caught a foul ball (in the 2nd deck!), so he may have been right.  Obviously his girlfriend wasn’t going to miss Game 7, though, so I watched that one at home, and we all know what happened.
Coda:The first time my friend saw my decoupaged table, one of his first comments was “where’s the Game 6 ticket?” 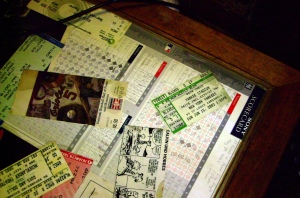 For me, I had a hard time picking something out – there’s the autographs I’ve gotten at Brewers free Block Parties, the ticket stubs to things like the Rose Bowl or last year’s MLB postseason, but ultimately I had to pick the poster my (now deceased) father got me of the US Women’s National Soccer Team.

I grew up in soccer – I don’t just say playing, because, frankly, it was my life. It was an accomplishment for me in the first week of my freshman year of high school to not wear a tournament t-shirt or soccer shorts for an entire week. Every weekend we were out of town at a tournament. My brother and I both played, my dad coached and also worked for the local professional team, my mom was that team’s statistician. We lived soccer.

And this was prior to 1999 and Brandi Chastain. There weren’t girls who played soccer. I grew up playing on all boys teams. When I finally switched to girls teams at 14, I hated it. I got a lot of cards for being too physical and they were more worried about their ponytails and nail polish.They didn’t play year-round and were also playing softball, volleyball and basketball. I just wanted to play soccer and it felt like I was the only one.

Women soccer players getting their own poster, sponsored by Nike and not just standing their as a team, but being shown making great plays and awesome moves.

The poster is well loved. It was on the wall of my dorm room with that greasy, sticky blue stuff and the edges are all torn and gross. It’s likely not worth anything, but to a teenager who just wanted to play the game she loved – it meant a lot. 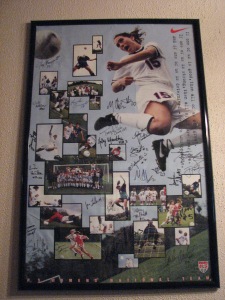 So what about you all? What’s the favorite thing that you own?

2 thoughts on “On momentos and memorabilia”