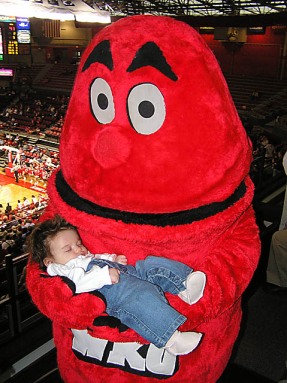 It is nearly time for the NCAA tournament, and by extension, the Ladies… Bracket Brawl (look for a sign up post late Sunday).  Since my alma mater is on year three of Absolute Hopelessness Where Men’s Basketball Is Concerned*, I like to spend conference tourney week selecting underdogs to root for come March Madness Thursday.  I keep hoping that one of these years I’ll pin my hopes on an underdog that  becomes a true Cinderella, but as of yet, I always bank on teams of the play-valiantly-but-lose-the-first-weekend variety.  So join me on my quest to find this year’s VCU, won’t you?

*It’s a real thing.  And extra painful when, immediately before the onset of said Hopelessness, you had Blake Griffin.

Reasons to root for them:  They were the 7-seed in their conference tournament and won the automatic bid in a game where they were down 13 with 12 minutes to go. Their coach was fired in January (when the team was 5-14) after an overtime loss to a team that turned out to have six players on the court in the final possession, and finished the season 10-4.

They’ll pull an upset because: This is a team that clearly knows how to fight back against adversity, and is getting hot at the right time.

They’ll lose early because: The Sun Belt isn’t one of the small conferences boasting a ranked team this season (i.e., Murray State or Creighton) for a reason. The team’s slow start and lack of quality wins will probably result in a 14 or 15 seed, which means a difficult first round game.

Reasons to root for them: They haven’t made the tournament in 13 years.  Star player Ray McCallum, Jr. rejected scholarship offers from Kansas and UCLA to play for his dad (that’s them in the picture).  And I’m always a sucker for the school-I-didn’t-know-was-a-school (with apologies to people from Michigan).

They could pull an upset because: See above about Ray Jr.  They also have a center who transferred from Indiana. And they hail from the Horizon League which has had a certain amount of tourney success in recent years (remember a little school called Butler?)

They’ll lose the first weekend because: Like Western Kentucky, a slow start almost certainly dooms them to a 14 or 15 seed.

Reasons to root for them: This is one of the few arenas in which Ivy Leaguers are at a disadvantage.  Also, forget 3 or 13 year tourney droughts — it’s been 66 years for Harvard.  There were only 8 teams in the tournament the last time they were invited! As a result, they also have one of the best ex-player stories.

They’ll pull an upset because: In two months you have the emergence of Jeremy Lin ( I couldn’t find a decent picture because googling “Harvard Basketball” gets you 95% Lin pictures), and the end of a six decade tourney drought.  Someone up there likes Harvard basketball this year. Harvard’s also predicted to fall in the 10-11-12 seed range, which is a prime position for an upset minded team.

They’ll lose early because: Cornell’s first round win in 2010 was the only NCAA tournament game the Ivy League has won this century.  Jeremy Lin included, Harvard’s actually produced more US Presidents (8) than NBA players (4). (You can bet you’ll hear that fact plenty of times during their first round game, too.)

Reasons to Root for Them: Proven track record of Cinderella success.  Shaka Smart is still the coolest coach in college basketball.

They’ll Win Because: This year they grabbed the automatic bid instead of an at large — giving them almost a week to chill out and wait for their tourney assignment instead of sweating out Bracket Sunday. They’ve had win streaks of 6 and 11 games already this year.

They’ll Lose Early Because: The old “target on their backs” may be a cliche, but it’s true that none of their opponents will fail to take them seriously this year. VCU also lost four of their starters from last year’s team, so they’ll have a very different look this year.

Do you have an early rooting interest?  Maybe you’re one of those lucky people who has ties to a school already (or with reasonable hope of being) in the tournament?  You’ll all be welcome in our Bracket Brawl come Sunday!