Your TV, radio and internets are being bombarded with Year In Review posts and specials as I type this. Well, guess what? It’s no different here at Ladies… We took a few moments this week to reflect on our favourite memories of this past year. Some will be hilariously obvious, others may surprise you. All of them will make you warm and fuzzy, like a delicious flute of champagne.

Personally, my favorite moment goes back an entire year to January 1, 2011 when the Caps beat the penguins in the Winter Classic. As a Caps season ticket holder, I was able to purchase seats. The rain did not bother us one bit, in fact it was appreciated. The forecast of rain caused officials to push back the start time and let us recover from New Year’s Eve. Watching hockey outdoors, in a football stadium, under the lights was an experience I would never trade. The Caps beating the Pens 3-1 was icing on the cake!

Other than that, there weren’t many highlights for this Maryland/DC/Baltimore sports fan. I suppose watching the Ravens cream the Steelers twice this season was pretty awesome (are you sensing a theme?) and the Orioles beating the Red Sox the last game of the year to keep them from the postseason was also pretty cool. That O’s win was pretty spectacular for us fans, and the team seemed pretty pleased. It was a nice respite from another losing season.

Here’s the thing: It’s been a really good time to be a Wisconsin sports fan. We’ve had a good run. It started with the Badgers being in the Rose Bowl. It sucked that they lost, but it was awesome that I got to be there.

Obviously the Packers winning the Super Bowl was big. The Packers’ run this season is also pretty good.

The Brewers winning the NL Central and then winning the NLDS in extra innings in game 5 (and being there to witness it in person) was probably the biggest moment for me. The whole playoff run was awesome and I was totally privileged to have a full set of postseason tickets (thanks boyfriend!)

I was at the Wisconsin/Penn State football game where the Badgers clinched the Leaders Division and a berth into the first ever Big Ten Championship game. Now the Badgers are back in the Rose Bowl.

I’m not joking – it’s been a good run for Wisconsin sports fans.

My favorite sports moment of the year was probably when my hometown Omaha Storm Chasers (the AAA team of the Royals) won the Pacific Coast League championship. The game was on the road, so the team hosted a watch party at an Omaha bar, and it was packed even though it was a weeknight. The game was broadcast over the Internet, and the bar put it on almost every screen in the place. The whole front office staff was there, and provided a stadium atmosphere, complete with our usual emcee, everyone singing ‘Take Me Out to the Ballgame’ at stretch time, and chants and cheers as the Chasers got closer to victory.

When the final out was made, champagne bottles were popped and sprayed everywhere, and since I was taking pics with a team-owned camera, I had to be kind of careful to not get soaked…to no avail. I was still finding champagne spots on my black boots a month later! It was an unusual experience but the staff and hardcore fans made it one I will never forget!

I think it’s pretty obvious what my general favorite sports moment was. The Cardinals’ entire postseason was pretty incredible, really, and Carpenter’s complete game shutout in Game 5 of the NLDS (outdueling Halladay of all people) was almost my favorite — and might have remained so had Game 6 of the World Series not happened. If there was one game that was a microcosm of the Cardinals series and their propensity for ruining the cardiac health of their fanbase, it was that game. But the best part was that, late in the 11th inning, when the Cardinals had already rallied from their last strike twice, my boyfriend sent me the video of “I Need a Hero” from Footloose as a joke. As I pressed play, David Freese came up to bat and promptly sent the ball over the fence. That one’s going to be hard to top for a while.

I didn’t get out to see any live professional sports this year – too busy graduating from university (finally!), settling into a new job and spending my hard-earned bucks seeing U2 not just once but twice (related: 2011 was the year I fell in love with Arcade Fire). That’s not to say I didn’t have a few favourite moments:

Sadly, I missed seeing this live on MLB.TV because I was in Montreal for U2 Concert #1. But I can’t complain. I witnessed the hit in which he passes Gehrig in person, for heaven’s sake (I won’t link it here. You’ve heard me go on about it on the blog enough.) Regardless, the milestone is simply amazeballs. I just hope he got a great gift basket for the accomplishment. 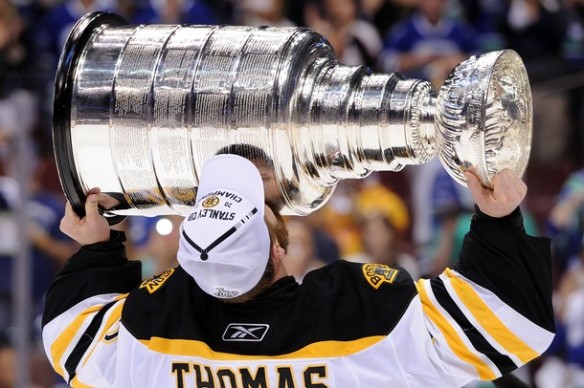 I couldn’t help but get behind the Bruins in the Stanley Cup Final – I was surrounded by Canucks fans by the bandwagon full and I knew so many diehard Bruins fans who had waited decades for this. And Tim Thomas. We’ve talked about this.

The Bruins’ triumph was sadly overshadowed by an extremely ugly riot in Vancouver that essentially sent the nation into a shame spiral. But something special emerged from that awful event that still makes me proud. I was especially stoked when days later, I saw TV footage of friends of mine handing out Timbits and hugs to strangers on a Vancouver street corner in an effort to demonstrate the city’s true nature.

4) The Leafs were kind of alright!

Well, it was nice while it lasted.

I remember this past winter, when one of my dearest friends – a Red Sox fan – drove me bananas with jeers about how the Yankees had completely lost their minds signing Colon (and for that matter, Andruw Jones). I wasn’t worried about the move – he had to earn a spot on the roster first. It was a low cost, low risk move that turned into a nice surprise. When my pitcher boyfriend Phil Hughes struggled, it was Colon who stepped up. And he was terrific! Sadly, he wasn’t the same after his hammy injury but still managed a 4.00 ERA over 29 games, including 26 starts, and 135 strikeouts. It’s doubtful the Yankees will call him back, which is unfortunate. I like proving Red Sox fans wrong. I like a comeback story even more.

On behalf of the Ladies…, thank YOU for reading this modest little blog, for your comments and for your continued devotion. You make it worth the late nights we’re at the keyboard, and we wish you health, happiness and peace in 2012.