First there was the lockout.  Then there was preseason.  Finally, finally the NFL season actually starts playing games that count, with tonight’s Saints – Packers matchup.  Which also means, after weeks of draft preparation and stat scrutinizing, your fantasy team can finally start proving its worth (or disappointing you, if you are like a buddy of mine who says he only likes his fantasy team before the season starts).  We have a record 14 teams in Ladies… League this year, so there is much excitement and anticipation.  My team, Creepier Doll Collective (it was too good a name! it had to have a sequel!) wound up with Dreamboat himself, Tom Brady, at starting quarterback, but oddly I am much more excited to have my backup quarterback…

I think this might be Tony's dream conversion project.

…my fellow Sooner, Sam Bradford.  At least if I have a crisis of real fan conscience and need to sit Brady during Jets-Pats I might still get some points.

Here’s who some of my fellow Ladies are looking forward to scoring points with:

Lady Bee (Gang Green(e)): this is the first fantasy football season with Ladies… that I’ve been unable to draft Aaron Rodgers. But my top QB is no slouch. Gotta admit I’m stoked to have snagged Drew Brees. Also of note: I have three guys named Green or Greene, which explains my team name.

CuteSports(DoUsAFarveAndRetire): I’m going to be a total homer and say I’m ecstatic to have Packers’ TE Jermichael Finley on my team. He’s a 6’5″, 250-lb target. Behind Greg Jennings, he’s Aaron Rodgers’ top target. After his injury-shortened ’10 season, he sounds raring to go. I think he’s going to have a huge season. 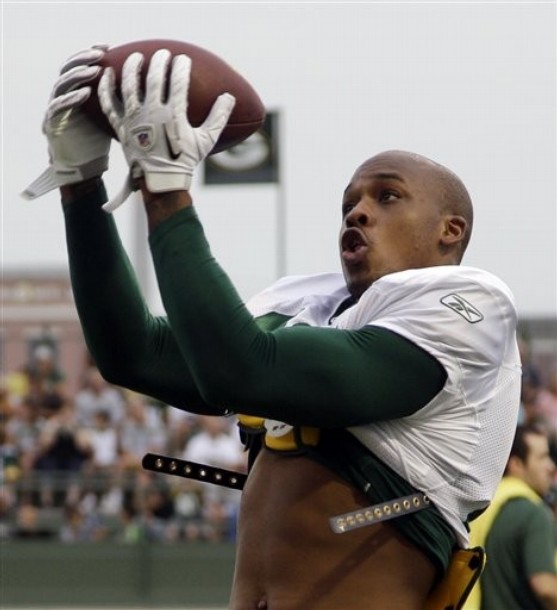 You know, Mr. AP Photographer, if you'd used just a touch less zoom, we could have had a full ab shot here. (AP Photo/Morry Gash)

Minda (Nebraska Loose Meats): My team is about as unexciting as you can get, but I was pretty pleased that the Autodraft Computer Overlords gave me my man, Dexter McCluster, in the late rounds. I am convinced that Dex will have a great season, and will also continue to be attractive throughout the season and into the playoffs.

Dex is a hard man to pin down sans helmet, but I finally found this. (AP Photo/Ed Zurga)

As you can see, tonight’s game is going to be very crucial to our Week One matchups (especially as I may have relied a bit too much on my boyfriend’s opinions and overloaded my bench with Saints players).  Who are you most excited to see playing for points, real or fantasy?