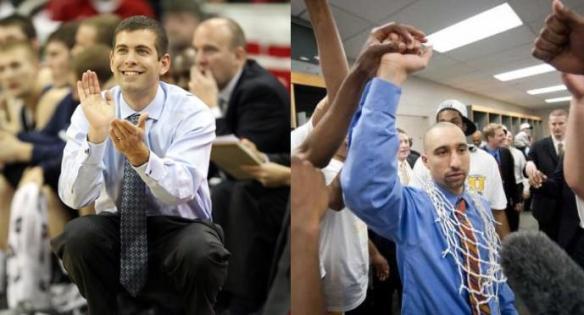 So admit it – your brackets are just as screwed up as mine are. Yeah, I know. Lots of upsets, lots of overtime, lots of surprises. But two of the bigger surprises came from the 8th seeded Butler and the young and admirable  Brad Stevens, and 11 seed Virginia Commonwealth (Virginia where?) with their fearless leader – Shaka Smart.  I was almost positive that the earlier Saturday game of this coming weekend would be Pitt vs. Kansas, especially when I was in 1000th place out of millions with ESPN’s bracket challenge after the first round and a half.  Boy was I ever wrong.  Thankfully, these two gentlemen make it very easy to feel good about rooting for the underdogs, and also make one of these final games very easy on the eyes.  Let’s take a side-by-side look at our favorite hottie NCAA BBall coaches  – one of them is guaranteed to be in the Championship Game, so regardless of Saturday’s results, which one wins Ladies… choice?

Figured the coach portrait was a good place to start.  I have to say that Smart has the edge here.  Stevens is cute, but airs on the side of dorky.  Smart looks fly.  He’s been an assistant coach at a few different schools since 1999 including Clemson and Florida, and has been with VCU since 2009.  Stevens has been with Butler since 2001 as an assistant coach, and took over as head honcho in 2007.

Next, the genuine smile – they’re both obviously really happy with how awesome they are.  I’m gonna have to go team Stevens here – Smart is just bringin’ the cheese.   Can’t blame him though – his overall head coaching record is 55-20, while Stevens has an incredibly respectable 116-24.

THIS IS MAI ANGRY FAAAAACE!!!! Not sure here – they both do angry pretty well.  I’m leaning more towards the intensity on Smart (though I think his photo is technically happiness after winning against Kansas, but for the sake of this caption…)  They may have similar pissy faces,  but they have very different coaching styles. Smart is known for his “havoc” defense with full court press and immediately organizing defensive charge after a made basket. Stevens is also defense-focused, but he has a noticeably calm approach and is more focused on analyzing statistics of his opponents.

Now for my personal favorite – the serious, pensive, brooding smolder. It’s a close one again, though Stevens may have a slight edge with the stoic feel of his shot – it’s hard to tell if Smart is angry, hopeful, farting – just not sure.  Cucumber cool and sexy Stevens broke the NCAA record for most wins in a coach’s first three years in 2010 and took Butler to their first Final Four in the school’s history.  Smart’s first season with the VCU Rams led them to a College BBall Invitational tournament championship and has led them to their first appearance in the Final Four ever.   As of this year, they are both the two youngest coaches to ever make it in to the Final Four.

Last photo is a bit of a bonus – I’m very disappointed to learn that no one bothered to upload any photos of Smart from his days at Kenyon College as a point guard.  His name is pretty accurate though – he turned down both Harvard and Yale for Kenyon, where he still holds the record for career assists at 542.  He also graduated Magna Cum Laude with a degree in history, and earned his Masters degree in social sciences from the first school he assistant coached – California University of Pennsylvania.  This adorable baby faced boy above is – you guessed it – Brad Stevens from his days as a point guard at DePauw.  He was also a smarty pants mcgee in high school and college, and still holds his high school’s record for career points, assists, steals and three pointers.

1 thought on “VCU vs Butler”