In a wonderful surprise, my boyfriend got us Rose Bowl tickets for Christmas. Round trip airfare was outrageous, but we had family who needed to get a car from Milwaukee to LA, so, intrepid folks that we are, we signed on for the 30-odd hour drive, bought one-way tickets home from LA (much more reasonable) and were in for attending the 2011 Rose Bowl.

Despite the Badgers losing, it was an awesome experience. I got to put my feet in the Pacific Ocean, see Hollywood and Highland, Grauman’s Chinese Theater and the Hollywood sign, eat an In and Out Burger and see a smog-free Los Angeles.

The game itself was fun, close and somewhat frustrating. Wisconsin was unable to get any defensive pressure, they inexplicably went for a pass play on a two-point conversion that would have tied the game when the run game had been effective all day, and there were too many dropped balls. Despite some sloppy play, they were in the game the whole way, which is all a fan can ask for. It was a great game to watch.

We got up about 5:30 am on gameday to make it to Pasadena for the Rose Parade. Thanks to a hookup, we parked within two blocks of the parade route and were able to stand right behind a row of chairs for a perfect view of the parade.

Follow the jump for many more pictures from the parade and the game!

There was a B2 Stealth Bomber flyover to start the parade!

The theme of the Parade was “Building Dreams, Friendships and Memories” as shown here on the first float 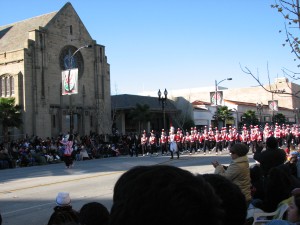 A little tailgating (we found brats to grill!) on the golf course that served as a parking lot later and we were ready to head in to the game.

Look at all the red!

The Badger Band did some playing during pre-game.

And of course Bucky Badger was there to rile up the crowd.

Parachuters came in, I think to deliver the game ball. This one was a big fan favorite:

We got our tickets from a family member that works at the university, so we had no control over where we were sitting. Turns out they were amazing seats. Even though it said we were in row 8, there was only one row of people in front of us. The tunnel the Badgers came out of was right next to us and the band was right there on the other side of the tunnel. They were AMAZING seats.

Here’s John Clay scoring a touchdown to make it 10-7 in the first quarter.

And one more action shot.

Another Wisconsin tradition is the playing of “Jump Around” between the third and fourth quarters. The Rose Bowl honors their Hall of Fame inductees during that time and shies away from engaging in any of the teams’ traditions, meaning the song wasn’t played. That didn’t stop the student section from jumping anyway.

My personal favorite Badger tradition is called the 5th Quarter. After every football game, the band takes the field and plays some of the fan favorite interactive songs. The student section long ago choreographed dances to go with each of these songs. Some of the songs include “The Chicken Dance,” “Roll Out the Barrel,” “Tequila,” “Swing Town,” and Wisconsin’s Alma Mater “Varsity.”

Despite the loss, the Badger band took the field for the 5th Quarter and most of the Badger fans stuck around to sing and dance along. It was a great high note to end the day on.

Sure, we drove in snow when we were less than an hour from Mexico and had to detour four hours through New Mexico because snow closed the interstate in Arizona, but it was so worth it for the experience. It was definitely the best Christmas present ever! Boyfriend’s going to have a hard time topping this next year!

1 thought on “I Was There: The Ladies… do the Rose Bowl!”