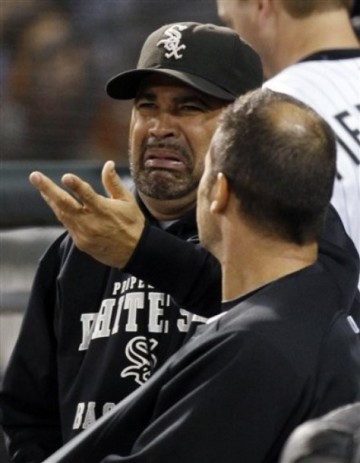 It seems like only yesterday we were squealing with delight about the arrival of the 2010 Major League Baseball season. Now here we are in the final weeks of the regular season. Some fans will be packing away their Pirates and Mets tees away with their capri pants and strappy sandals, reflecting on a season that should have been. But others will be biting their nails and rocking back and forth on their couches, popping Tums and living in fear that the stupid Rays will take the AL East (OK, maybe that’s just me)

Here’s a quick look at how the race to the postseason is looking heading into tonight’s games, and how this prognosticator (HAHAHAHA!) sees it going down:

No, it's not the Norwegian Olympic curling team. Just Tampa's Price and Longoria. (REUTERS)

Texas and Minnesota are clearly running away with their divisions, leaving the big hot mess that is the AL East. Tampa is a half game behind New York heading into the four game series that begins tonight at Yankee Stadium. Ivan Nova has emerged as a rotation saviour in the wake of Pettitte’s injury (and THANK JEEBUS HE’S BACK!), which has been a real comfort considering how nervous AJ makes me. I don’t think I have to explain that one.

I expect these teams to split the series, and they’ll be close wins. In fact, I’ll call it here: this division will be decided on the last weekend of the season, with my Bombers squeaking in. The Yankees will not be satisfied until they have shaved five years off my life expectancy.

Boston remains seven back of the AL Wild Card leader. Considering how they’ve fared by essentially putting a AAA team on the field this season, it would be unwise to count them out.

Heading into tonight’s matchups, the Wild Card situation is less clear cut in the National League with just a handful of games separating the Braves, Rockies and Padres. Maggiesox’s Phillies have won nine of their last 10 and Halliday still fascinates and scares the daylights out of me. I mean, wins, schmins, LOOK AT HIS NUMBERS! I say they take the NL East. Take a hike, Braves. You too, Giants. I’m calling Padres for the NL West and the Rockies to snag the Wild Card.

For the sake of Games Mistress’s breaking heart, I wish I could forecast the Cards clawing back up the standings. But I can’t see it. It’s the Year of the Reds. As I watched Cincinnati pull further and further away with the NL Central these last few weeks, I couldn’t help but recall these words from Will Leitch back in March. Eerie, no?

OK, enough from me. Must return to cultivating my love for Ivan Nova.

Is Supernova overused yet? (Getty Images)

4 thoughts on “Down To The Wire”