Yes, I know it’s just exhibition time and the games don’t really count for anything. But when this Buffalo loving Lady had the opportunity to check out the new Jets/Giants digs without it being -20° out, I obviously jumped. Here is a (almost literally) bird’s eye view and review of the fabulous new stadium from last Friday’s Jets game against Washington (which started as a snooze, looked as if it may end in a win, and ended in a 16-11 loss for NY).

While we may not have had the best of seats, it really couldn’t have mattered less for something like a steamy August Friday evening in Jersey. And though we missed it, I know the die-hards were all set up in the parking lot, tailgating the afternoon hours away (if they were so lucky as to have a summer Friday, that is). So let’s talk about the more important things first: beer and food. 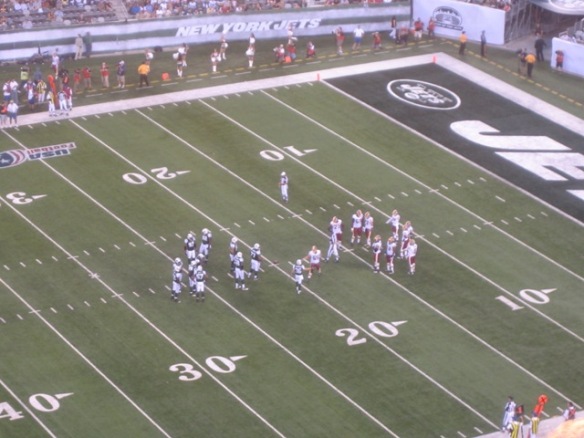 Beer. Yes, it’s going to be expensive at any arena. Yankees Stadium definitely has the highest price of any venue I’ve been to in recent memory (and I really can’t remember what it is – maybe $10 for a big-ish souvenir cup). The New Meadowlands Stadium has decided that $8.75 will be their chosen price per cup. $8.75. For a Bud Light (with optional lime flavor!). Now, I get that they expect to be losing some beer sales to the fact that many people will get sloshed in the parking lot before they enter the stadium. But I’m yet to meet me a cold, often damp, drunken Jets fan (or ANY football fan) that has ever, ever been like “You know what? Those 14 beers in the parking lot will surely tide me over for the rest of this long, cold, windy game.” NO!!!! Drunk people will ALWAYS want more beer! Therefore, NMS, you are just mean! And I am about $50 more broke without even as much as a buzz!

Next item – the food. I have to say I was pretty impressed with not only the options of food, but the setup. I will sing and sing the praises of Citi Field’s food and variety of it, but the new kid on the tri-state area block really made me happy. On the outer wall of the stadium, all the way around (at least at the tippy top), there are several rather large snack stands, with options ranging from dogs, burgers, fries and popcorn to fried hot dogs, grilled cheese, and clam strips. (Word to the wise: DO NOT have the clam strips. Yeah I know, no sh*t Buffa, don’t have clam strips at a football stadium?!) I digress. On the inner circle, there were several, several different types of smaller specialty stands and those were literally spaced out every. six. feet. I seem to remember a meatball stand, a chili stand (with vegetarian version!), beer, sausage, and something called pepper & eggs (bonus points to anyone who can explain to me why the hell this food concoction exists). Definitely not big lines (if any at all), and the condiment stand even had BBQ sauce and my beloved Frank’s Red Hot in giant squirt containers. Prices are…whatever you would expect. Quality is…what you would expect as well. But I give them an A for quantity and variety for sure. 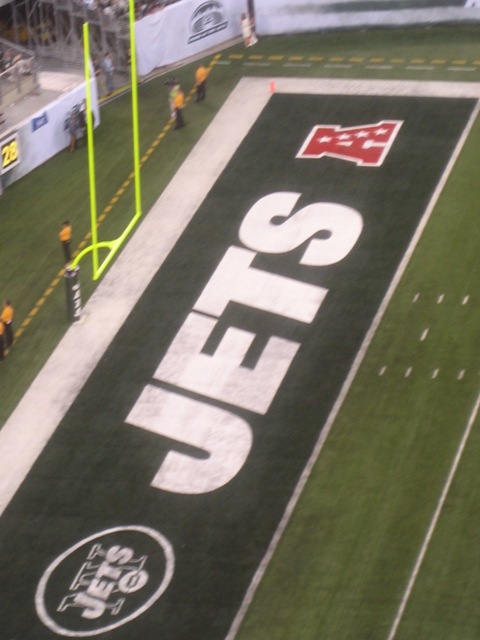 As far as seating goes, it doesn’t feel like there could possibly be a bad seat in the house. Even way up in the nosebleed section, you had four giant screens giving you live action, replays, scoreboards, news and happenings around the league, everything. Pretty good sound system too, although after hearing “And that is another Jets….FIRST DOWN” more than twice, one is bound to want to break it (one that is not a NY fan, at least).  It really is too bad that the game wasn’t very exciting, because I have to say that I was pretty excited to be there and check it all out. Maybe I’m just that desperate for football. Maybe I like ogling Mark Sanchez whilst he devours a hot dog. But whatever it is, I’m going to give the New Meadowlands Stadium an 88/100 overall, gaining points for the fact that they actually SELL Pepsi Max, and only losing points in their pricey bad beers, and the fact that if you happen to need to get to M Lot or the Pepsi Gate from the NJ Transit, you can look to your right and see said Lot and Gate, but you cannot get to them without WALKING ALL THE WAY AROUND. Making no speculations based on the quality of the Jets’ playing  that night, or the fact that Mark could screw everything up for the team this season unless he gets his head out of his ass and stops throwing interceptions…oops…, I leave you with a pretty, pretty sunset. 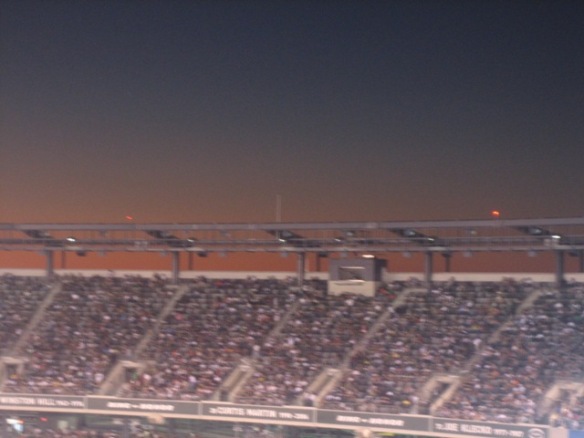 If anyone else has had any experience out at NMS, let me know how it went for you!

2 thoughts on “I Was There: The Ladies… Do New Meadowlands Stadium”