This pretty much sums it all up.

Well it looks like I just might still be in mourning.  It’s been a week.  One whole week since my beloved – and favored – Capitals were eliminated in the Stanley Cup playoffs.  My heart was, and still is, broken.

It’s times like this one when we realize that it’s great to be a well-rounded sports fan.  When one season comes to a close, another is either in full bloom or just beginning.  This year, that thought makes me even more depressed.  Typically, when the NHL season ends, I put my focus on baseball.  This year, I’m finding that pretty hard.

See, I’m from Baltimore.  Baseball is what I was raised on, particularly Orioles baseball.  The O’s are the worst team in baseball, currently.  Yes, I know they haven’t had a winning season in over a decade.  I’m used to disappointment.  But this kind of disappointment?  It sucks.

I was only six years old the last time the O’s got off to this bad of a start.  I have no memory of that season.  I guess even my six-year-old self couldn’t handle the heartbreak and permanently blocked that season from my mind.  I can fondly recall the days of glory when the Orioles made the playoffs and actually won series.  Of course, I’m a tad too young to remember the World Series victory of 1983, but I was alive and at the victory parade.

This might be my only memory of the 1988 season. I still have this issue lying around somewhere.

I want the glory days back.  I’m not even asking for a World Series victory here.  I just want to see a team finish above .500, or, better yet, competing for a playoff spot in the AL East.  Heck, I just want to go to the Yard and see a win!  Is that so much to ask?

Yes, the O’s did sweep the Red Sox in Baltimore for the first time since 1998 this past weekend. I’m well aware of that.  But they couldn’t keep the win streak alive.  I know that the O’s have a shitty first half schedule, but that’s no excuse.  I want Orioles baseball back in Baltimore.  I want to know what it feels like to be good again.  I miss those days.  I long for those days.

I love these guys. This is the future of the franchise. I just hope Nick and Adam can lead the O's to the promised land again.

I’m no stranger to disappointment, but this is a new low for me.  It’s a combination of coming off of the highest high with one team, and immediately finding a new low with another.  The Capitals were favored to finally win Lord Stanley’s Cup.  They won the President’s Trophy.  They were kicking ass and taking names all season.  Everyone was anxious for the playoffs.  That’s what the team was looking forward to. Play out the season and kick ass in the playoffs.  Well they played out the season and bombed in the playoffs.  It was a disappointment of epic proportions.

Now what do I have left? The Orioles?  I love them, don’t get me wrong.  I’ll go to the games the rest of the season, but they’re a bit depressing to watch.  So now I just wait.  I wait for Caps development camp to start in mid-July, and Ravens training camp to start at the end of July.  Then September rolls around and football is finally back.  I will (depressingly) circle the home dates for Maryland Football on my calendar. (Be There For the Comeback, BTW.  I’ll be there, but that’s a whole other can of worms.)  Then I will look at the Ravens schedule and lament the fact that I won’t get to see any games in-person this year.

I'm sick of sad faces, but I'm using this picture for two reasons. a) It depicts how I feel and b) Nolan Reimold is gorgeous. That is all.

Soon, it’s October, and it’s time for hockey again. And all the while baseball is going on, and I’m slightly disinterested. If not for fantasy baseball, I don’t know what would keep me involved.  The Orioles will probably be eliminated from playoff contention before the All-Star break, but they will still be my team.  I will not abandon them.  I will not be accused of being a bandwagon fan when they finally get to taste victory again.

I support my teams through thick and thin.  I don’t abandon them when they need me the most.  And you know why?  They don’t abandon me when I need them the most.   Sports are a refuge for some of us.  It’s a way to escape.  It doesn’t matter how bad a team is playing. They come out and play every game. They do their job and try to keep me entertained.  Because, let’s face it, all sports are a form of entertainment.  We take them so seriously sometimes, but it’s a game.  So no matter how bad your favorite team is, support them.  I might be depressed and sad over a bad season or disappointing finish, but I still love them.  I will still renew my Capitals season tickets because there’s always next year.  I will continue to go to O’s games and have fun with my friends – win or lose.  I will keep going to Maryland Football games, even though they might not win a single one, because who could pass up a tailgate on a Saturday?

I’m a sports fan.  You can call me obsessive or you can call me dedicated.  Either way, I love my teams through the good and the bad.  There’s always something to look forward to when you have sports in your life.  If you’re not going to a game, you’re watching one on TV.  It becomes apart of you.  So embrace it.  I’d put up with a million disappointments just for one moment of pure satisfaction.  And right now, I’ll just have to wait for that victory a little bit longer than I anticipated. 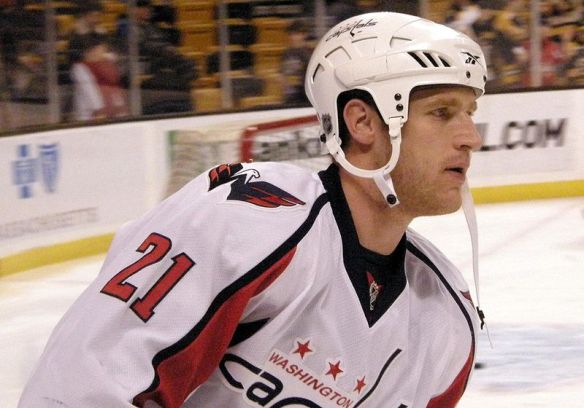 And now I will put a random picture of Brooks Laich at the end of my post because a) I can, b) he is awesome and c) he is hot. He also scored the Caps first and last goal of the season. Did I mention he's hot?

1 thought on “Good Mourning: Letting it all Out”