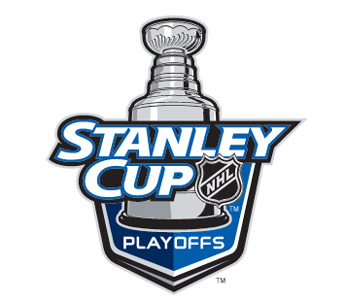 So Lady Bee and I have decided to do the preview for the 2010 playoffs.  Since we’re the hockey fiends, we figured we’d do a fun roundtable discussion of predictions and hotties.

Follow us after the jump for some knowledge and eye candy!

So first off, let’s talk predictions.  Here’s the match-ups for the Eastern Conference:

Raven’s comments are in Red, obviously

Lady Bee’s comments are in Blue.

Since I’m beyond a total homer, I’m taking the Capitals in 5.  Canadiens have been on a downward spiral lately, even with getting leading scorer Mike Cammalleri back.  The Caps have been on cruise control for awhile, and they were still managing to beat top-notch competition.  I know they’re all anxious for the playoffs, so they’ll catch fire soon enough.

I definitely see the Devils beating the Flyers.  I’m gonna say in 6 games.  I don’t think the Flyers goaltending is going to do them any favors, despite the lack of scoring in NJ. Kovalchuk will really help the Devs out, for sure.  Brodeur is more than capable of stealing a series.

The Sabres/Bruins match-up is the one I think can go either way.  Miller hasn’t looked the same since the Olympics and Buffalo hasn’t really been scoring.  The Bruins have been up and down all season, but I’ve seen them a few times this season, and when it’s stiff competition, they play hard.  I see this series going to 7 games.  I’m gonna go with the Bruins pulling the upset.

The 4/5 seed match-up is usually a good one, and I don’t think the Senators/Penguins are going to disappoint.  I really think the Senators can take this series from Pittsburgh. Everyone seems to think that the ‘Guins are the same Stanley Cup winning team from last season, but they are definitely not.  They’ve definitely had their fair share of struggles this season, and the Senators have been a fairly solid team.  I see the Sens taking this one in 6.

Here’s the match-ups for the Western Conference:

So what do you think, Bee?

I’m with you on nearly all counts, Raven. The Devils are more stable and solid. I think Julien will have no problem lighting a fire under the Bruins. The Canadiens are simply screwed. But I’m going with Pens over Sens. I think Kovalev being out is going to really hurt Ottawa. Also, I hate the Senators like burning so I’m biased.

Is it just me or do the Sharks find a way to underachieve every postseason? I don’t see them going deep in the playoffs, but I do see them taking this series from the Avalanche in say, six, because I don’t think Colorado will make it easy. The Avs have their youth movement and grizzled vets like Foote, Hejduk and the Right Honourable Darcy Tucker. But Thorton-Marleau-Heatley are scary.

That said I could be wrong…remember what I said about the Avs at the start of the season?

And while we’re on the subject of my lousy predictions, OMG, what the hell is going on in Phoenix?! Playoffs?! I’m going with the Coyotes on this series against Detroit. Jimmy Howard has been great between the pipes, but I’m going with that intangible aspect of hunger. I just think Phoenix has more of it. Coyotes in five.

I’m going out on a limb and picking the Preds to take down Chicago in six. I have a feeling they’ll be the big surprise of the postseason. Nashville has yet to win a playoff round. They’re so due. And how about some love for former Leaf Steve Sullivan!

The Canucks and Kings series will be a dandy to watch. And was I not right about the Kings? Yes, yes I was. This one will go to seven, and as much as I am loving Drew Doughty I am giving this one to the only Canadian-based team worth caring about this postseason. Don’t let me down, Luongo!

Wow, Bee!  We agree on almost everything.  So we must be completely wrong!   I’m with you on your Western Conference picks, minus Chicago.  I think the Sharks actually win a playoff series.  *Throws micro-chip confetti*  I’ve been following a bit more WC hockey this season, and I’ve especially been following the Blackhawks.  I definitely see them going far, but I’m not going to quite call them my favorite out west.  I’ve really been getting a kick out of following the Coyotes this year.   I’m pretty bummed they drew the Red Wings, though.  The Red Wings are healthy and scary good.  I just hope my boy Bryzgalov keeps kicking ass.  I’m gonna say that series goes to 7 games with the Coyotes pulling an OT game 7 win.  Yeah I’m even calling OT in game 7.  Bold, I know.

Kings vs. Canucks is a bit of a toss up for me.  I haven’t seen enough of both teams to give a real educated decision.  I’m gonna pick the Canucks because Ryan Kesler is American and hot…I mean, the Canucks are playing really well and those Sedins are too hot to handle.

So now that I’ve brought up the hot factor…who are your picks for the hottie to watch in each series?

Let’s start with the Eastern Conference.

Again, I’m biased, but my hottie to watch in the Caps/Canadiens series is Brooks Laich. Total hottie with the potential to blow up in the playoffs. 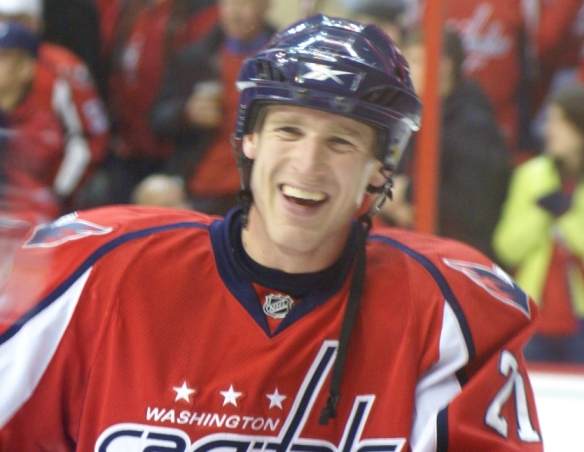 In the Devils/Flyers series, my pick is Travis Zajac.  He’s been on my fantasy team all year, and he’s pretty dang cute.  Plus, he’s quietly been putting up big numbers. 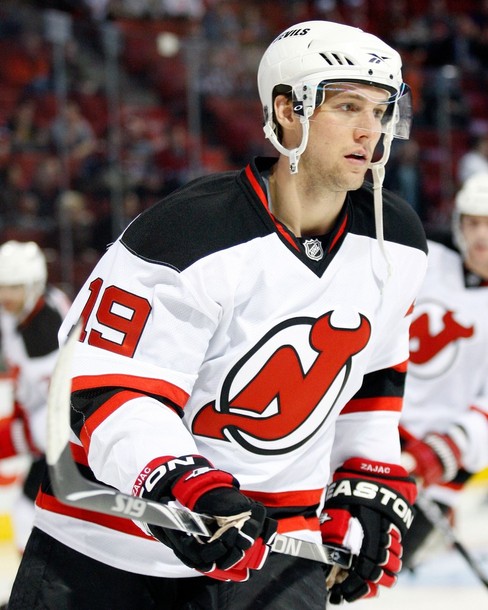 For the Sabres/Bruins series, I’m going all cougar here and picking potential Calder winner Tyler Myers.  Myers has been having a great year, and I think he’s adorable.  Remember his name because you’ll be hearing it a lot in the next decade. 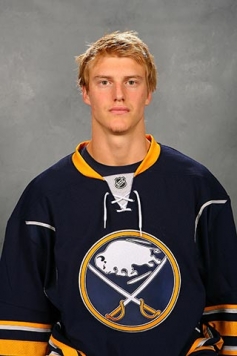 Lastly we have the Penguins and the Senators.  There are some obvious hotties, but I definitely have my guilty pleasure hottie.  That would be Kris Letang of the Penguins.  I know it’s a sin for me, the Caps fan, to crush on a ‘Guin, but c’mon, the boy is hot. 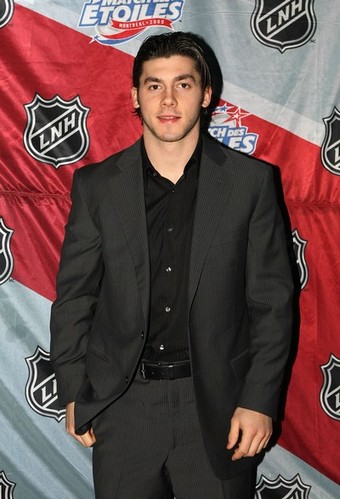 Now onto the Western Conference…

Let’s tackle the Sharks and the Avalanche.  Well the Sharks are a lot hotter than I thought.  I’m going with Brad Staubitz. 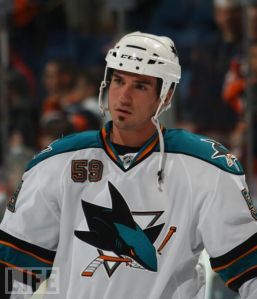 There are so many choices in the next match-up: Blackhawks vs. Predators.  I do have a standby hottie, though.  Patrick Sharp FTW! 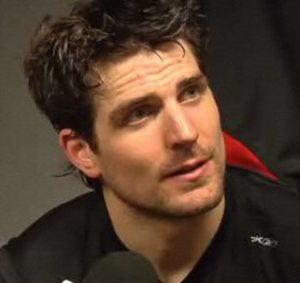 So now it’s onto the Coyotes and the Red Wings.  One of my all-time favorite hockey players plays for the Coyotes, so there’s no way I’m not picking him.  Matthew Lombardi…you are a hottie!! 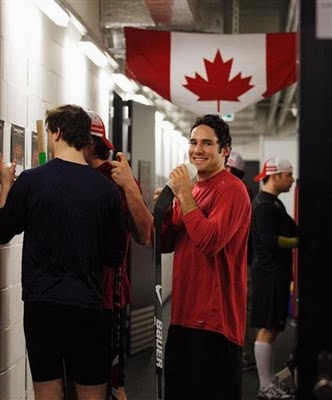 I’ve pretty much already told you who I adore on the Canucks, so no offense to Dustin Brown of the Kings, but Ryan Kesler is my choice for the hottie of that series. 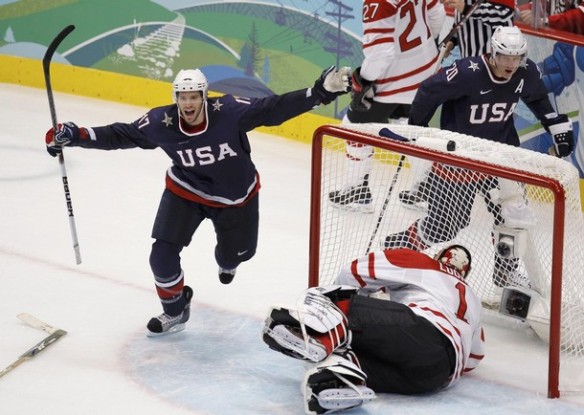 Ooh…delicious!
I’ll start with the games I can stay up for in the East. I’ll go with Mike Cammalleri of the Canadiens in the Montreal/Washington series. Readers will recall Mike was featured in our Hanukkah Hotties series, and he finished the season with a respectable 26 goals. I have to make a point of seeing this man play in person one of these days (any excuse to visit lovely Montreal, really)

Devils/Flyers? I’ll go with “old man” Brodeur. You know I love him in this sweater.

Who is this cuteness who racked up 52 points for Boston this season? Why that’s 23-year-old Czech David Krejci! Bee likes!

I’ve made my deep hatred of the Senators clear, so I have no hottie love there. Letang is a quality choice! But why don’t we give the readers a little Jordan Staal while we’re here. We’ve documented the handsomeness of Mr. Crosby a billion times, and we all know he’s going to attempt to grow that creepy ass beard again anyway.

Now on to the Wild West…

If I can’t watch the Leafs in the playoffs again, I will console myself with the sight of former Leafs such as Darcy Tucker. Yeah, he’s not exactly lighting up the scoreboard for Colorado, but whatever. I like that he’s a little bit crazy.

In honour of a friend of mine who teaches in Tennessee and happens to be a Preds season ticket holder, my hottie to watch in the Blackhawks/Preds series is goaltender Pekka Rinne, he of the 32 wins in 58 games this season.

I’m with you on the Coyotes, Raven, so I’ll pay tribute to their captain and the last connection to the Winnipeg Jets still in Phoenix, Albertan Shane Doan (props to Jenna and her Coyotes blog Hip Checks where I found this fine photo)

Oh wow. I think I’m starting to get excited about this, even without my team in the thick of it. Are we going to get any sleep at all these next two-and-a-half months? I think not!
As for who gets to hoist Lord Stanley’s goblet of rock, hmmm… I’m going out on a huge limb and saying it is finally Washington’s turn. And I’m not just saying that to get on your good side ;) I just don’t see the Pens repeating, nor do I see a clear champion coming from the Western Conference.
Gah…I don’t think I can pick a Stanley Cup winner just yet, at least not publish it in writing. I have a very important dog in the race, and I don’t want to jinx anything, although, I have made some Stanley Cup pacts with a few friends.  You all know what my heart is saying, and I’ve gotten “that feeling” a few times this year.  I’ve only seen my favorite team win it all twice in my life.  First it was the Ravens in 2001 and then Maryland Basketball in 2002.  I can tell you, without a doubt, that I had “that feeling” both of those years.  That’s the only time I ever had “that feeling” about either of those teams.  So I hope my gut is right this time around.  If it happens, you’ll definitely get a post on it. haha

So what do you think?  Any hotties overlooked?  Any match-ups we were beyond wrong on?  You know where to let us know.