Heading to Miller Park for tonight’s Brewers/Cards game I was in a sports funk.

My Wisconsin Badgers had lost the hockey National Championship, the Bucks had lost to the Celtics – and I work with two obnoxious Boston fans, and the Brewers had lost two straight to division rivals the St. Louis Cardinals – the first on a blown Trevor Hoffman save and the second in embarassing 7-1 fashion to a rookie pitcher on Fox Saturday baseball.

To top it off, the Brewers are historically awful during nationally televised games and they were about to face Chris Carpenter.

If it weren’t for the bobblehead giveaway, I might not have gone to the game at all.

And then this happened: 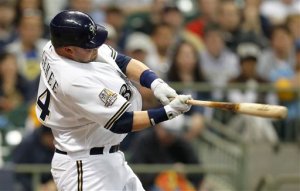 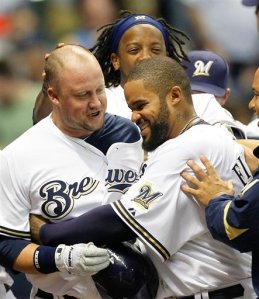 (both photos by AP’s Jeffrey Phelps)

Casey McGehee hit a walk off home run to save the Brewers from being swept heading into a big series with the Cubs while they have their home opener at Wrigley.

Trevor Hoffman blew another save, but got the win when McGehee won the game in the bottom of the ninth.

And suddenly everything is once again right in my sports world.

Isn’t it amazing how a beautiful spring night in crappy nose bleed seats can turn everything around?

And while it has nothing to do this post, can I sneak a little love for my “secret hockey boyfriend” Blake Geoffrion? Blake won the Hobey Baker Award on Friday – the first player in Wisconsin’s history to do so. I decided not to subject you all to a full post about a sport most of you don’t watch and a player you’d never heard of, but I couldn’t let this go by.

I can’t tell you exactly why or when Blake reached “secret hockey boyfriend” status for me. He’s the team’s leader. He’s from a historic hockey family (his grandpa Bernie “Boom Boom” Geoffrion, won six Stanley Cups and is said to have invented the slap shot, and his great-grandfather Howie Morenz won three Stanley Cups – both are Hall of Famers). He’s on Twitter.

But really, my favorite thing about Blake is that he knew enough about himself and his game to know that he wasn’t ready to head to the NHL and that he could do great things with the Badgers as a senior, so he chose to stay at Wisconsin and let his coach know before second semester ever started. The team had a backbone for the following year before the college hockey season had even ended.

Not only do I love what he does on the ice, but I respect how he’s led the team and carried himself as a captain.

It’s easy to assume his lineage comes with a lot of pressure, but you’d never know. In a video package for ESPN during this postseason, he mentions everyone in his family, not just famous or hockey-playing ones. He’s as proud to be Boom Boom’s grandson as he is to be the brother of a Georgia business owner.

And now Blake won the Hobey. Now he’s not just Boom Boom’s grandson, or a member of the Geoffrion hockey legacy. He wrote his own chapter in the legendary family’s history and I’m so excited and happy about it I teared up.

When you’re a fan of such a marginally followed sport, it’s even easier to get attached to the players and feel like you’re as much a part of their lives and they are yours. So though I know I may be verging on creepy stalker status now, I just wanted to share this great thing that it seems like nobody knows about.