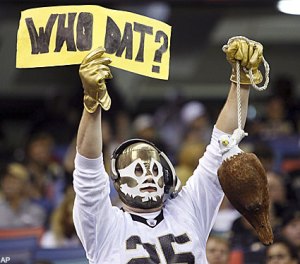 Riding out the Ladies… Super Bowl excitement further, I’d like to extend my congratulations to Drew, Coach Peyton, and the city of New Orleans on winning the 44th Super Bowl!!!  And call it my nature, blame it on where my interests lie, but I found it only fitting to include this awesome video for K. Gates’ “Who Dat”, along with my own analysis and recap of the (incredibly disappointing) Super Bowl ads.

I have to admit – I don’t think I’d even heard of Who Dat before…maybe two weeks ago? But after learning a little more on the origins of the Who Dat chant that the Saints have popularized so wildly, it turns out it’s apparently everywhere, including in their new ‘theme song’ by K. Gates. Ridiculously adorable video complete with little marching band kids below.

Obviously, the hype and the chant worked, and I couldn’t be happier for the team, for the city, for Saints fans, for everyone really.

HOWEVER, I was greatly anticipating some seriously great Super Bowl ads, as I do every year.  To my disappointment and dismay, this years ads, well, SUCKED.

Let us begin with one of about two that actually stood out in my mind and made me chuckle: those crazy E*Trade babies!

Served its purpose – creepy talking babies that are so cute you have to pay attention, product placement was clear, and the end made you chuckle in a totally non-cheesy way.

What did not make me chuckle was the abundance of violence this year! Don’t worry, I’m not against fake violence by any means. But literally every other ad was violence against each other via slapping, against a dog, against your mom (looking at you, Tim Tebow), even against the elderly (who hits Betty White like that? seriously!). Yes I understand that they’re all for fun, and it is during a football game. But don’t you think there were…more than usual? Here’s the Betty White one in question, which was actually a great idea – you’re definitely not yourself when you’re hungry. And of course Betty can take hits like this:

And I will absolutely NOT be posting any of the screaming chickens. Those ads scared me. Lots. Other than that, all I really have to say is that I hope Monster didn’t spend too much on this stupid fiddling beaver commercial…

…And while Careerbuilder did a little better, they still really creeped me out with the abundance of crotches…

…And speaking of crotches, apparently Dockers thinks that you aren’t a man unless you don their pants:

Actually, you’re not a man unless you wear Dockers and drive a Dodge Charger:

I won’t post it because it’s not worth watching, but apparently CBS wants us to know that you’re not a man unless you wear Dockers, drive a Dodge Charger, and use Dove for Men. Anyone else notice that theme here?

EA would also like us to know that they are no longer bad ass. The ad for the new game Dante’s Inferno, which almost didn’t make it on the air (CBS didn’t really appreciate EA telling its viewers to ‘Go To Hell’ and settled for ‘Hell Awaits’ instead) was incredibly bad ass. On mute. If you happened to take it off of mute, you would have heard one of the most confusing (and personally I think lazy) song synchronizations – Bill Withers’ classic “Ain’t No Sunshine”. Take a cue from Sega who used a completely appropriate (and otherwise relatively unknown) La Roux remix that fit the ad PERFECTLY for the new Bayonetta game.  See the disappointment here:

All in all, I was really disappointed with the ads this year. I am not compelled to purchase Doritos, Coca Cola or Bud Light any more than I already did or did not, I don’t really care about Bridgestone tires, and luckily I don’t have manhood to be insulted. But there was one ad that managed to not only stand out but make me laugh and remained memorable into Monday ’round the water cooler – The VW punch bug ad. It had a nostalgic realism that displayed the product well and made us actually believe that children as well as cops play punch buggy. Plus Stevie Wonder really makes it all the more awesome.

What were everyone else’s favorites?