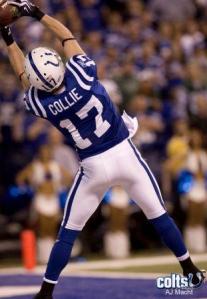 Clad in my favorite P. Manning jersey, and drenched in a fever induced sweat, I watched my Colts do work on Sunday and win a trip to Miami for Super Bowl 44!

A highlight of the game at this point would be a tad redundant, so instead I thought I’d bring a little love to a lesser known Colt, who had a heck of a game and rookie season, Austin Collie!

This lovely little Canuck comes to the Colts by way of Brigham Young where he took home the title of Las Vegas Bowl 2007, MVP and had some wicked impressive receiving yards.

In his rookie year he leaves the regular season 60 passes (tied with Percy Harvin amongst rookies, where did that guy go to school again? :O) for 676 yards and seven touchdowns in the regular season, and has 11 receptions for 175 yards and two TDs in two postseason games.  Considering that slightly more than Harrison had in his last season with the Colts, I’m liking this kid’s future. 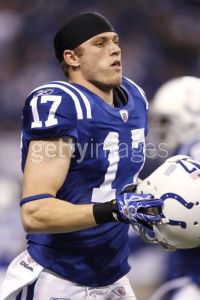 The damage done by Collie, Garcon, and P.Mann come February 7th, will be so monumental, it will be a three way tie for MVP.

With God and Collie on our side… we can’t lose!