I still can’t believe that the championships series are already here. But I’m certainly not complaining. October is the best sports month, and you can quote me on that one. The NLCS started last night and hopefully the ALCS will start later tonight. As long as the weather behaves. I’m particularly happy about the ALCS this year. The Yankees have actually made it out of the first round. Now there is just one problem: They have to face the Angels. The same team that they are NEVER able to beat. Well the Red Sox ALWAYS beat the Angels and we all know how that changed last weekend. So hopefully the Yankees can finally get over that hump. I know it’s stupid logic but let me have it. I’m scared about facing the Angels!

OK I am done with my rambling about the Yanks. Let’s take some time to congratulate the teams still in. And we ladies… will make some predictions. 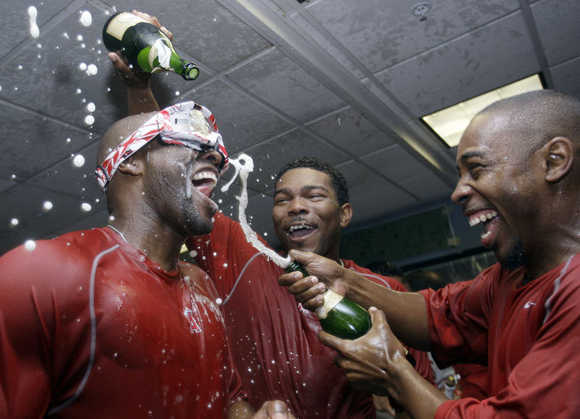 I fully enjoyed watching the Angels beat the Sox with Papelbon on the mound and in Fenway Park. That will be the last time I ever root for the Angels!

I know this is from when the Yanks won the division, but I add to include it. The look on Tex is classic. 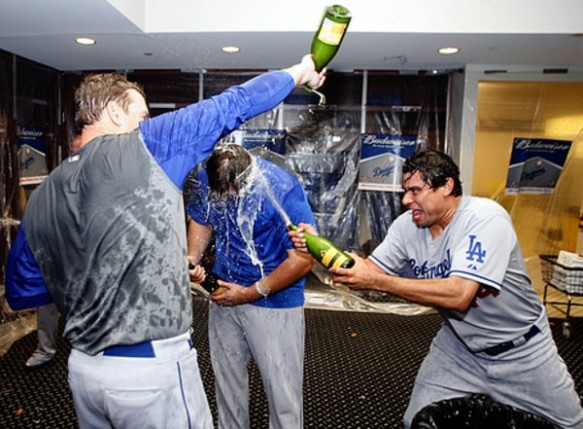 The Dodgers definitely put up a good fight, but they just fell a little short against the Phillies last night.

Congrats to the Phillies for going up 1-0 in the series. And hey, Lidge got the save!

Now onto the predictions:

My predictions are just personal preferences.  I want a battle of LA, so Angels in 6 and Dodgers in *gasp* 5.  Dodgers win the whole shebang…and Manny decides it’s finally time to cut the dreads, so Mr. Flat N Breezy himself (aka George Sherrill) emerges from the dugout and shaves his whole head.  Andre Ethier is named World Series MVP, and then he turns to the camera and professes that he’s been stalking me on facebook and wants to marry me.  I, of course, agree, and we live happily ever after.

I’m going to go with Yanks over Angels in 7 and Dodgers over the Phillies in 7.  Yeah I went there. Plus if it were actually the Yanks vs. the Phils, my Mets loving boyfriend would have a hernia or something.

Let me tell you how little I care about the Championship Series.

But ok, I’ll take the Phillies in 7 games and the Angels over the Yanks in 6 games. There are no good reasons for these choices, other than hatred of all things Yankee and the fact that I’d puke if Manny got a ring this season.

I picked the Pirates to win the Central this year. I suck at predictions. But I’m taking Dodgers over Phillies in 6, and Angels over Yankees in 7.

Also, I should note last year I picked an Angels-Cubs World Series so clearly I am really good at playoff picks.

I say dodgers make quick work of the phillies. Yanks in seven. Then my boys take the series and I get to go to a game!

The Yankees will beat the Angels in 7, while the Phillies will beat the Dodgers in 6. Maggiesox and I will go for weeks without speaking to each other. The Yankees will win the World Series. Red Sox Nation will implode. George Steinbrenner will pie AJ Burnett. Crane will swoon. Derek Jeter will marry Minka Kelly, make me cry and become a UN Goodwill Ambassador.

Am I getting too ahead of myself?