Ah, football season is finally here! I think I speak for everyone when I say that it couldn’t have come soon enough. Preseason football is so boring. Watching starters play about one quarter does not feed my appetite for football. Also, this will be my first season playing fantasy football (wish me luck!), so that makes the start of the season that much more exciting. There are 13 games this Sunday and another two on Monday. Some should be entertaining, while others are sure to be a snooze-fest. Unless you’re a fan, you probably aren’t counting down the hours until the showdown between the Rams and Seahawks.

So without further ado, I present to you (in no particular order and with my completely biased opinion) the top five games of Week 1…

This is definitely one of my favorite pics of Brady Quinn.

Sure we've used this pic before, but I don't really think you guys have a problem with that.

Jets vs. Texans: Another game of the week, another good-looking QB. Are you noticing a trend here? It will be interesting to see how Mark Sanchez does his first game. The Jets haven’t had much to cling onto these past few years. Maybe Sanchez can be that ray of hope the team and the fans need. 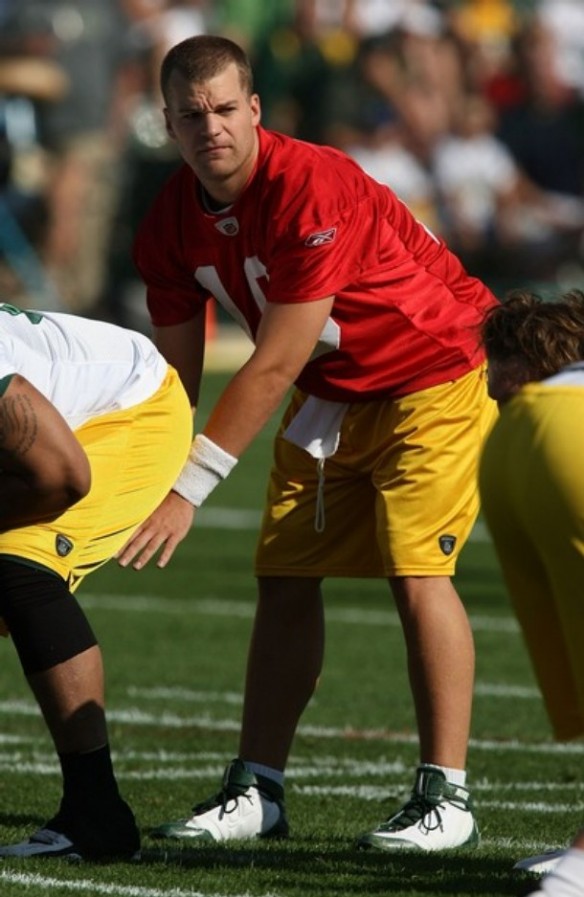 Sure Matt Flynn has nothing to do with why this game is interesting. But he is nice to look at and that goes a long way on this site.

Packers vs. Bears: Quarterbacks really were all the rage this offseason. Here’s yet another game where the starting quarterbacks are what make the game interesting. Once again, I think that most people are rooting for Aaron Rodgers to do well. I am one of those people. Also, we have the crybaby himself, Jay Cutler. I think that Denver fans are going to be more interested in this one than the game the Broncos play.

I cannot stand Tom Brady, but he sure does have a cute son!

Patriots vs. Bills: Tom Brady is back! I don’t like the guy but even I’m interested to see how he will do his first game back. Also, you’ve got TO with his new team. I wonder how many games it takes for him to start bitching about something.

I wanted to stick with the whole QB theme I had going. This is a whole lot better than a pic of Eli.

Giants vs. Redskins: Why is this game here? Well, I do recall saying that this will be a biased list. I warned you! But it will be interesting to see how the Giants perform. Will the receiving core that they have be enough? Okay, well maybe you don’t care. But I do!

3 thoughts on “The Top Five Games of the Week”