I don’t know any baseball fan that doesn’t love going to minor league games. When you really think about it, what’s not to love? The tickets are so much cheaper than professional games, as are the food and drinks. They are also really entertaining. There is always something going on in between innings; they are extemely fan friendly. Last night I went to Richmond County Bank Ballpark, home of the Staten Island Yankees. I only spent $16 and that included the tickets, soda, a chicken sandwich, and a free hat. For all that at Yankee Stadium, I would have broken the bank. Keep reading to find out why if you ever find yourself in Staten Island (I know it doesn’t seem likely, but it could happen), you should definitely check out a game at Richmond County Bank Ballpark. 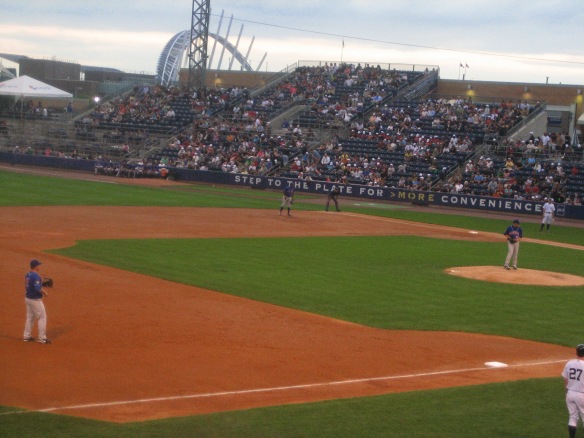 That was the view I had from my seats. (It was section 4, in case you were wondering.) The actual price of the tickets is $12, but I paid $16. Since I was going with a group of ten people, I was able to get the All-You-Can-Eat package for just $4 more. Here’s my advice, it’s not worth it. They only offer hot dogs, hamburgers, and grilled chicken sandwiches, and none of the food is very good except for the chicken sandwich. It does offer unlimited soda and water, which I liked, but still not worth it. You have to stand on a really long line and are limited to one item per trip. In general, the food at the ballpark is cheap. It’s only $5.50 for chicken fingers and french fries! Also, for the drinkers out there, the prices are cheap. Well, at least to me they are. I am used to nine dollar beers at Yankee Stadium. So to me, $5.50 for a beer is a steal. I can’t stress enough that you should not get the All-You-Can-Eat. You save enough on tickets (they range from $12-$16) and travel, that you can afford to just buy yourself something to eat if you get hungry.

As far as getting to the stadium goes, public transportation or car is perfectly fine. If you’re driving, parking will only cost you $5. If you are traveling from another borough, I suggest public transportation. For starters, the Verrazano Bridge going into Staten Island cost a whopping eleven bucks!! Yes, the bridge cost almost as much as the actual ticket would! You are better off just taking the ferry. It stops off at St. George and the ballpark is right there. 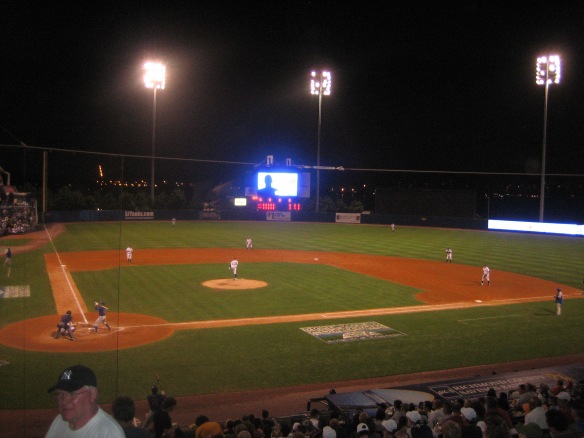 Right behind the field is a beautiful view of New York City.

So my camera sucks and I wasn’t really able to get the picture I wanted. But I swear, behind that field is a lovely view of the New York City skyline. It’s really nice to watch the game and alse be able to look out to the water and Manhattan. It also makes it much more comfortable; there was a really nice breeze throughout the game.

The cheap tickets and lovely view is great, but my favorite thing about minor league games is how family-friendly they are. Besides all the freebies given out throughout the game, there is a fireworks show afterwards and then kids 12 and under can run the bases. We took my two-year old cousin. It was his first ballgame and he had a blast. The fireworks show is really amazing. They definitely do not jip you. It lasted a good ten minutes. I think I enjoyed it more than my cousin.

The pictures from my crappy camera do not do the ballpark justice. Trust me on this one! It’s a really nice night out. So if you happen to be in Staten Island, you should definitely check out the Staten Island Yankees.

6 thoughts on “Take Us Out to the Ball Game: The Ladies…do Richmond County Bank Ballpark”