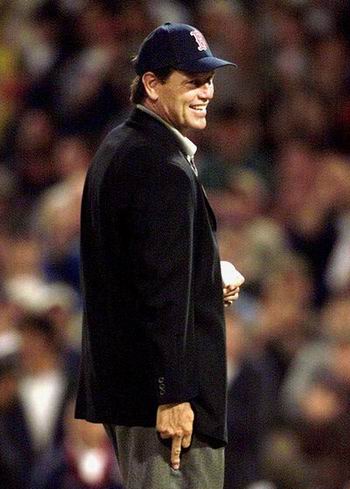 It’s rivalry week here at Chez Sox. I’ve had the Sox v. Yanks games on, and have been alternately shouting and laughing at my TV. Everything that could possibly be picked up and thrown has been taken away from me, and the husband has been banished to his computer to listen to his big rivalry games, the Phils and the Mets. Suck it, New York, more or less.

I was going to write this big, magnanimous post about rivalries and how they’re good for the sport and good for the fanbase because a rivalry gives even the most casual fan something to talk about. I was going to be the bigger person and say that my mom is right (and not completely insane) when she says that she kind of likes the Yankees, because Sox/Yanks games are just bigger than the other 144 games for those of us who list our home address firmly in Red Sox Nation.

I was going to do all of that bigger person-type stuff, but the idea of saying anything nice about the Yankees fills me with utter, utter revulsion. I don’t have it in me. I can’t do it.

Sure, you could make the case that there’s a part of me that loves this rivalry, or loves the vindictive little thrill of glee I get when I see that picture of ‘Tek giving A-Rod a glove sandwich. And sure, seeing images of those Yankees fans in 2004, so smug and self-satisfied in their ‘Got Rings?’ shirts going into Game 7, dejected and crying when the carnage was over is something that will give me delight to my dying day.

And of course, there’s the same part of my husband who leaps in the air (all 6’7″ of him) punching the air in delight when Chase Utley, Mets Killer, once again takes the wind out of the Mets sails. I’m pretty sure he’d beeline over to the Universal Life Church to become a minister so he could perform the Romo/Simpson nuptials himself if it meant Tony continued his unblemished record of sucking out loud in the playoffs.

We acknowledge this. We embrace it. Sure, we love the rivalry, but it doesn’t mean we secretly love, or even mildly like the other team. It just means we love the hate, because when it comes down to it, that fiery, unadulterated hate is part of being an avid fan of a team, and we like it that way.

We especially like it when it means we get to see the other team (and their douchebag, loudmouth fans, NEW YORK) cry. Does that make us bad people? Nah. That just makes us fans.

Suck it, New York. Suck it long, and suck it hard. 8-0 on the season? Looks mighty, mighty nice from this corner of Red Sox Nation.

In all seriousness, I’m really delighted that the Sox got to play a team with bullpen management problems worse than their own. C.C. Sabathia has got to be absolutely livid right now. Heh. Good.

2 thoughts on “I love New York. I hate the Yankees.”