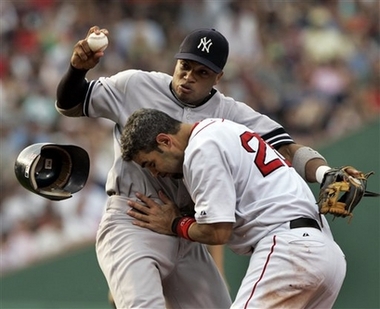 Team rivalry. Seemingly nothing wrong with it, and actually it’s abnormal to not have some friendly competition and strive a bit harder to win against a certain team more than others. Maybe it’s two cities that battle in more ways than sports, maybe it comes about from a trade that develops a grudge, or maybe it’s something rooted in history that carries itself over 100 years of one the most well known and deepest hates – the Yankees and the Red Sox. But why are some rivalries the way they are today, why carry on the tradition of hate throughout generations, and why hate so hard?

One of my fellow Ladies hit it on the head with the lack of love for the Cubbies, and being a Yankees fan born and raised only to be brought in to a Mets house, it was instilled in me to hate all Red Sox men and now the Phillies as well. Hell, when I was barely old enough to talk I was being taught to yell “Squish the Fish!” for the sake of my Buffalo Bills. But why such hatred? Have I ever met any of these guys that I supposedly hate now? Am I right in actually saying out loud “I hate Utley?” Have I developed a valid opinion of their personalities from a press conference and have a completely reasonable hatred for them even still? Of course not. Varitek could be the nicest, sweetest guy behind a plate, but as long as he’s wearing red, I have to hate him. It streams through my Yankee-loving blood, and if I showed a slight sway in a mere liking of his personality, I would probably be disowned by the “real” Yankee fans. Why though? What’s the point of hating so much that causes fans to cheer out when a member of the opposing team gets wailed with a line drive to the kneecap? I can understand some friendly competition and have even been known to get into a tiff or two with nearby inebriated fans, but cheering on injury isn’t something you’ll hear me do. It might make you sound like a good fan, but then you’ll also sound like a pretty terrible person.

This photo is a friendly reminder of the serious, serious hatred that extends back over 100 years between the New York Yankees and the Boston Red Sox. It’s the kind of hatred that caused a Boston fan working on the new Yankee stadium to bury an Ortiz jersey in hopes of cursing them. It’s the kind of hatred that causes fans at Fenway to boo Johnny Damon every single time he comes up to the plate. Sadly enough, it’s even the kind of hate that costs lives. To make a long story brief, once upon a time in the early 1900s the BoSox were an incredible team with some financial troubles. They sold Babe Ruth to the Yankees, and so began the Bambino curse. Why bother hating thereafter? Because it feels completely normal to cheer for your team and root against the opposing team whether they’re a true rival or not. But when history gets involved and fans become emotionally vested, the hatred becomes so strong that I have actually thought twice about dating a Boston fan (what would my brother say?) Doesn’t anyone remember how seeing an image of an Ohio student making out with a Michigan student on a commercial a few years back was enough to turn stomachs?

Who will win? Top-heavy or megaphone beak?

The Mets – Phillies rivalry isn’t quite as intense as a century of hatred, but ever since the 2006 season it’s been a growing pain in both city’s sides. After the game we saw this weekend, it was made even more apparent and obvious that 1) the Phillies are very proud of their World Series Champions of 2008, and 2) they really, really hate the Mets.  But was it okay for the drunken Phillies fan to taunt the gentleman wearing a Piazza jersey in front of me for the first half of the game and question his manhood, followed by screaming at Reyes that he is a bad person and he should go to hell? Or is he taking it too far? I think that it’s one thing to jokingly tell the Mets fans to go back to Queens, and quite another to cheer and clap when a wild pitch smacks Beltran in the foot. It’s okay to love your team, and it’s definitely okay to have some friendly fire with a rival fan. Just don’t take it so far that you sacrifice character and sensibility. And you might as well calm down with the haterade, friend, because when it all comes down to it, I hate you too. Just a friendly hate though. That is, until you call me “Wright jersey girl” and tell me to go home one more time…

And PS – in light of our rivalry theme for today, I find it wildly inappropriate and yet completely necessary for this Mets girl to post a bonus taste of a Phillies pitcher that I just cannot hate. I can’t. Meet Chad Durbin.