Can you believe all the hotness we’ve seen this week?  And we aren’t even halfway through our lists yet!

A lot of people consider seven to be a lucky number (for the record, it’s not lucky for me, although fourteen is my lucky number so maybe it’s half lucky).  I’m not sure whether being number seven on our respective lists means good luck is on the way for these particular athletes, but I know I feel luckier for getting to look at them.

Lebron James – I think he’s smokin’ hot and I love to watch him play.  I’ve never been an NBA girl; I’m college basketball all the way, baby.  But I took up an interest when King James arrived.  The man is practically a one-man wrecking crew, but I’d like to see him get a little better supporting cast around him.  I also dig his funny commercials.  Mmmm.

I think I have mentioned a few times (or maybe more than a few) that I am not a baseball fan. I cannot remember the last time I watched an entire game from start to finish, if ever. I don’t root for a specific team. But I stinking LOVE David Wright. And hence he is my Number 7 pick. He is so incredibly hot that I will tune into the occasional Mets game, and sit through several minutes just to catch a glimpse of him. That smile! That ASS! I mean come on! Plus he’s almost exactly my age, so clearly it is meant to be, or something :) Plus he appears to be a good guy, has his own charity, no salacious stories about road-beef…. Husband material if you ask me. I could be a baseball fan for David Wright. He’d have to play shirtless though.

My #7 hottest hottie is Justin Upton. Guhhh, I’m drooling. If baseball doesn’t work out for the prettier Upton, he could easily model. Preferably underwear.

You can keep your Federers and your Nadals, I’ll take James Blake every time. His secret? Baldness. Since he’s gone for the shaved head look, Blake’s hotness has increased. Kind of like Agassi, but more so.

Cubs first baseman Derrek Lee. Hot, incredibly nice, and an ass that won’t quit. 7 is my favorite number, and the number of my favorite Cub ever (Jody Davis) so it’s quite an honor.

My #7 pick is Jacques LeMaire. Perhaps I would not say “hot,” but I think he’s sexy in a Sean Connery sort of way. And I could just close my eyes and listen to him talk all day. Say what you will, judge me if you must, but I pick Jacques Lemaire. 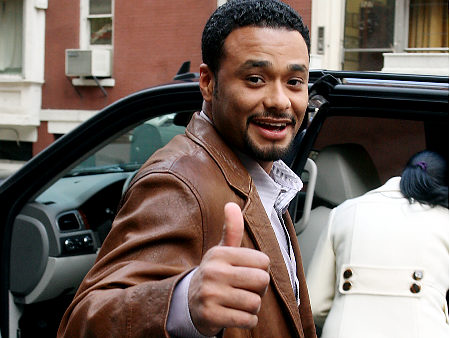 My lucky # 7 is none other than #57, Johan Santana.  He was supposed to be our savior, and he def. held up his end of the bargain.  Too bad our bullpen pissed the season away.

Carmelo Anthony. No matter how many dumb choices he makes, I’ll adore him. His play is gorgeous, he looks like a giant puppy dog and his smile is amazing, and his charity work and cute kid make me squee. Melo has the ability to transform me into a puddle of fangirl goo, but I’ll forgive him for taking away my dignity.