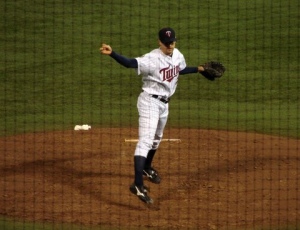 Pat Neshek is out of the Minnesota Twins lineup, likely for the rest of the year. He has an acute partial tear of the ulnar collateral ligament in his right elbow, as shown on an MRI from Friday, May 9, 2008. Neshek and the organization are hoping he won’t need Tommy John surgery, as that would put him out for most of the 2009 season as well. According to twinsbaseball.com, Neshek said doctors feel the injury can be treated with rest and rehabilitation. “We’re going to prepare for Opening Day next year,” Neshek said. In the meantime, will he still be able to update us on his status in his entertaining and informative blog, On The Road With Pat Neshek? The rest of the story, after the jump…

Neshek injured his arm in the top of the eighth inning against the Chicago White Sox. He said he felt something “tweak and roll over” – much like his unique sidearm pitching. When answering how that all began, Neshek said:

“I actually was drafted by the Twins out of Park Center High School in Brooklyn Park throwing over the top. That same day of the draft I was hit on the forearm … during our last high school game. It hurt so bad throughout the entire summer I was not able to pitch but was able to play shortstop. While playing short the only position the throwing didn’t hurt was sidearm. When I attended Butler in the fall I was able to go off a mound again and try to throw. Everything felt excellent. … My coach at Butler … said that he didn’t recruit me to throw that way but he liked what he saw. … I’ve been that way ever since. The Twins … drafted me again this time throwing from a completely different angle.”

Even throwing sidearm, Neshek has enough strength to deliver a 96 mph fastball. Neshek has a lump in his forearm from where he was struck. Still, he looks pretty good.

Since being called up to the major league level, he earned the role as the team’s primary setup man last season and went 7-2 with a 2.94 ERA. Despite having good depth in the bullpen, with Matt Guerrier, Jesse Crain, Juan Rincon and Dennys Reyes all being possibilities to fill his position, Neshek will be missed the rest of the year. Jesse Crain’s recent performance may give him an edge, even though he had surgery on his right shoulder a year ago. He’s finally ready to play back-to-back days. Using twitchy Joe Nathan for both part of the 8th and the final inning is also conceivable, especially at home, according to manager Ron Gardenhire.

Pat Neshek was born September 4, 1980 in Madison, Wisconsin. He grew up in Brooklyn Park, Minnesota since he was five years old. He is an avid autograph collector, estimating his signed cards at over 5000. He cites the Kirby Puckett one he got when he was six as one of his best memories. That’s probably why he’s such a class act, signing autographs whenever possible and offering on his website to sign anything sent to him. Doesn’t he look darn cute doing it, too?

Neshek is devoted to fans in this regard, clearly putting in the time to provide signed cards, and has said:

“When any player signs for Topps it needs to be watched by a Topps official or someone that can certify that I actually signed the cards and no one else like my wife or brother jumped in and signed a couple (this has happened in the past with players). In my case the person in charge of watching me was Evan Kaplan, director of trading cards for the MLBPA. Evan had to sign an affidavit swearing that he would watch me sign every card. “

Hopefully he’ll have time to continue signing autographs and blogging while sticking to his rehab while he waits for his arm to heal. Then he can resume his role as the set-up man for the Minnesota Twins! If nothing else, his sense of humor should get him through.

Clearly, from this video, he’s one tough SOB.

Nevertheless, I’d recommend meat and potatoes while he’s on the mend.

7 thoughts on “Will Pat Neshek Still Be Able To Blog After Throwing His Arm Out Pitching Side-Arm?”