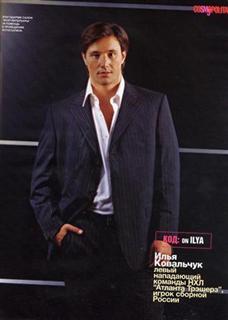 One of the hardest aspects of picking a divisional all-star hottie team is… well.  Let’s face it.  Way too many hotties.  Big all-American boys that have been rowdy from birth.  Enough rough and tumble Canadians to make a girl start to say, “eh” at the end of every sentence.  Lots of sweaty, fit, Europeans who maybe don’t speak that much English, but who cares.  This is not a blog about “small talk”.    So let’s get to the hotties.

“Kovy” to his friends.   I won’t lie.  I spent so much time  reading Russian fan-sites about Kovy, I’ve picked up a fourth language.   Pics of Kovy at Russian MTV, pics of Kovy dealing blackjack, pics of Kovy in every different state of play.  Kovalchuk is the first Russian to ever be taken first overall in the draft in NHL history.  Currently is one of the top ten goal scorers in the league. 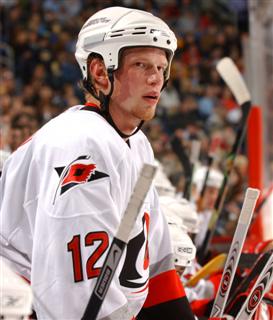 Hot red-head?  You betcha.  Has two other brothers who also play professional hockey.  The Hansen brothers could only hope to look so good. 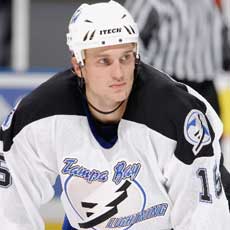 Another Russian!  He is lightning fast, (no pun intended), and taught himself the finer arts of North American hockey (and English), by watching Jagr and Yzerman on TV while still in the minors.

I don’t know how anyone would ever get by Van Ryn on the way to the goal.   One smile and they would be blinded by the brightness of his teeth, the blue-ness of his eyes, the cute stuble on his dimpled….  Stick? Puck? Goal?  No need to score, everything you need is right here. 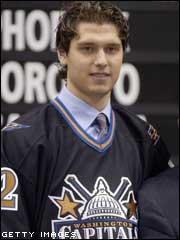 Sure this draft day photo, but who can resist baby cheeks?!?  With tousled hair?!?

Hedberg was a no-brainer for me.  I’ve seen in up close and in person, and he is smoking hot.  Plus, everyone should have the nickname, “Moose”.